Matt Smith
Raika (ライカ, Raika) is the tritagonist of the MegaMan NT Warrior anime series, debuting in Axess. Initially a cold and aloof NetSavior from Sharo, Raika and his NetNavi SearchMan.EXE focuse squarely on the mission and little else, willing to sacrifice others as "collateral" damage if they get in the way. Over the course of ths show, Raika eventually opens up and becomes a good friend of Lan Hikari and Chaud Blaze, and the three form a team. When merged with SearchMan, Raika becomes C.F. SearchMan.

Like his video game counterpart, Raika is a cold, calculated, and at times ruthless operator who cares little about who gets in the way so long as he completes the mission.

He appears in the movie.

He appears in episode 12.

He appears in episode 1. 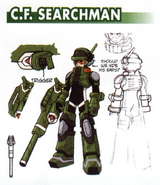 Raika's sketch #2.
Add a photo to this gallery

Retrieved from "https://megaman.fandom.com/wiki/Raika_(anime)?oldid=352528"
Community content is available under CC-BY-SA unless otherwise noted.