Rain Flush (レインフラッシュ, Rein Furasshu) is Toad Man's Special Weapon. It was originally created to cause rain for agricultural purposes, but the water was replaced with powerful chemicals to be used as a weapon against Mega Man in Mega Man 4. It fires a capsule into the sky, which then creates an acid rainstorm that covers a wide area and can't be avoided. The rain affects all things on the screen (provided they are vulnerable to it), including shielded enemies like Mets and Pakatto 24, and it can hit several times before disappearing. The weapon can hit Drill Man while he is underground and pierces Skull Man's Skull Barrier.

Rain Flush is Bright Man's weakness. Pharaoh Man and Skull Man are semi-weak to it as well. The weapon can be used as a substitute against Pharaoh Man if one has run out of Flash Stopper, though the player will have to contend with Pharaoh Man's speed. In Mega Man IV, Rain Flush can also extinguish the fire in Napalm Man's stage for a short time, and solidify the quicksand in Pharaoh Man's stage.

Interestingly, both Toad Man and Mega Man use it in the form it takes as a usable weapon - firing a pod straight into the air, which then explodes and produces a cloud that releases the acid rain on targets below.

In the manga, Rain Flush is explained to be a two-step process. First it emits a spray of high-pressure liquid for environmental preparation, the liquid being a special ionized colloidal mixture. The resulting water vapor rapidly expands and reaches its freezing point in the atmosphere. In the second step, it sprinkles ice crystals into the forming clouds to force the development of rain. When Toad Man worked on farms, it had fertilizers and pesticides mixed into the rain, but after being modified for combat, it now creates acid rain.

Rain Flush had a brief appearance in Mega Man Gigamix, where Toad Man and Dr. Cossack's other robots (powered by the Energy Elements) managed to destroy Uranus with their attacks. 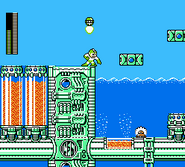 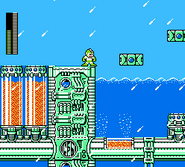 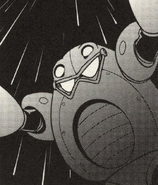 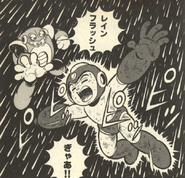 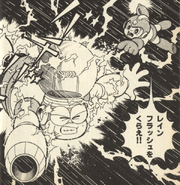 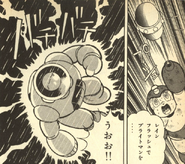 Rain Flush in the Rockman 4 manga