Nightmare of the Sky Bridge

"You are too big to be a slug. Just get lost."
—Zero, Mega Man Zero

Rainbow Devil (レインボーデビル, Reinbō Debiru) is a boss from the Mega Man Zero series. The Cutting Shadow Squadron's secret weapon, the Rainbow Devil's body is made of a liquid metal that constantly changes colors. Its core, a Pantheon head, controls the body and can change it into any form. Attacks sink into its body, rendering all but the most well-placed attacks to its core (its only vulnerability) useless. The details of the Rainbow Devil's construction are unknown, but it is rumored that he was derived from lost data of ancient times.[1]

The Rainbow Devil is fought in the top of the Neo Arcadia Tower. Its attacks consist in slithering towards Zero and damaging him. It also gives a stretched punch and transforms into a dinosaur-like head, which will bounce off and separate into two spheres (later into four spheres) and stop bouncing. Another one of its attacks consists in launching pieces of itself everywhere in a spiral form.

The Rainbow Devil reappears as the first boss of the final stages. Its attack pattern is similar to the first game, but when it takes a spiral form to launch pieces of itself everywhere, the pieces are now explosive. Another change is that its EX Skill, Nightmare Blow, is now a common attack, and it has a new EX Skill used when its health is reduced by half. The Rainbow Devil changes its body to a gray color and becomes invulnerable for a short time, while it walks toward Zero and makes debris fall from the ceiling with each step.

Some of Rainbow Devil's attacks. 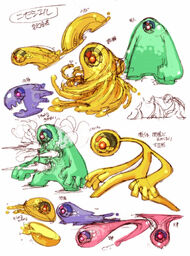 Retrieved from "https://megaman.fandom.com/wiki/Rainbow_Devil?oldid=294813"
Community content is available under CC-BY-SA unless otherwise noted.