Rainy Turtloid was a massive Reploid, nearly filling the entire screen with his height. He possessed a large turtle shell on his back with two green gems adorning it, and his mouth formed a reptilian muzzle. His armor was mostly black and reddish pink.

Rainy Turtloid was a mild-mannered yet dutiful individual. He held high respect for both X and Zero and regretted having to face them. However, he was moved by his duty to serve Gate again, and was touched by the thought that Gate would revive him despite all the trouble he'd caused. This meant he would readily lie his life down for Gate's causes, and truly believed every word he said.

Turtloid was a valued member of a water purification team. His shielded shell was designed to withstand even the harshest acid rain, so he was one of the few Reploids authorized to enter and explore restricted "Level A" pollution zones. However, concerns grew that his defensive capabilities were too great and could be dangerous, and many requested Gate to weaken him. Gate refused to comply and was punished, and as a result, Rainy Turtloid felt responsible and took his own life so as not to continue being a burden to his creator.

The gentle Turtloid was later revived by Gate to serve as one of his "Nightmare Investigators" in Mega Man X6, being responsible for the Inami Temple. Thankful for having a second chance and owing his life to his master, he loyally followed his duty, even if it meant having a fight to the death against X or Zero.

Turtloid's attacks consist of firing a series of missile from the two jewels on his back and drawing into his shell and rolling in the direction of the enemy (Ensuizan). At low heath, he can also launch single Meteor Rain projectiles while moving in his shell, and on higher difficulties can summon a literal shower of them much like X's charged version of the weapon. He can only be damaged when the two jewels on his shell are destroyed. With X, Turtloid can be frozen with Ice Burst and attacked while he is vulnerable. But, since the ceiling is too high for Zero to use Hyoroga, the player will just have to rely on regular saber strikes and Z-Buster shots. However, players can also use Shoenzan to easily destroy the jewels in two strikes.

X: Rainy Turtloid! You must be one of the investigators of the Nightmares.

Rainy Turtloid: I've heard a lot about you. You have my respect.

X: Huh? Respect? Then will you stop the Nightmare phenomena for me?

Rainy Turtloid: Nightmare... It is the only thing that can save the future of the Reploids...

X: What are you talking about! They have hurt us all...

Rainy Turtloid: It is my duty to believe my master... My master was punished because of me... And yet, he let me live. That is why... I'll do what I have to do, even it means my life...

X: Turtloid! I know you can understand. You know what you should do right now.

Rainy Turtloid: X, I understand what you mean, but it's my duty. It's also my duty to eliminate anything that disturbs my master... X, my life is yours!

Zero: Are you Rainy Turtloid?

Rainy Turtloid: I've been resurrected to carry out an important duty. A very important duty given by my master... Though I brought shame on my master, he allowed me to live. That's why... I have to finish my duty, even if it means sacrificing my life.

Rainy Turtloid, along with all but a handful of Mavericks from the X series, appeared in the Worlds Unite crossover event. Here he was part of a Maverick army resurrected by Sigma and set against the alliance of heroes led by Sonic the Hedgehog, Mega Man, and X. He and his comrades assaulted the weary heroes with ease, and Turtloid seized Bubble Man before being attacked by Flash Man and Bunnie Rabbot. He was later amongst the Mavericks called away from battling the heroes and dispatched to plant Unity Engines on various worlds. 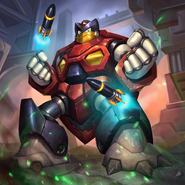 Retrieved from "https://megaman.fandom.com/wiki/Rainy_Turtloid?oldid=353700"
Community content is available under CC-BY-SA unless otherwise noted.