Rangda Bangda (ランダ・バンダ, Randa Banda) is the boss of the second Sigma Stage of Mega Man X and its remake Maverick Hunter X. Its design was based on an ancient mural Sigma once saw in Southeast Asia while still working as a Maverick Hunter. Although it was originally supposed to crush the intruder with its walls, they close only halfway.[1][2]

It looks like a face in the background wall with moving eyes, a nose gun, and a mouth serving as a pit of spikes. It can also move its side walls inward to try and force X into the spiked pit. In Mega Man X and its remake, the best weapons to use against it are Chameleon Sting and Rolling Shield.

It has three eyes, each with a different color and attack, that appear one at time from one of the two eye cavities. The blue eye will move straight in the player's direction, the green eye will shoot a single projectile, and the red eye will spread several waves of three projectiles in three directions. When the sides walls move in to try to push the player into its pit of spikes the player's movement, the nose-like core will move around the enclosed area in a zigzag pattern. If the core is destroyed before both eyes, the walls do not move, making it difficult to see the eyes.

The fight is similar to that of the original Mega Man X with a few differences: the red eye will only shoot one wave of projectiles, the green eye may sometimes retreat back into its cavity immediately after showing itself without firing and if the core is destroyed before both eyes, the walls will move back slightly, making it easier to see the eyes while being able to stand on the platform. In doing so however in Normal difficulty, both eyes of the same color will attack at the same time. If there is only one eye left it will use a stronger variant of its attacks: the blue eye will move in the player's direction three more times, the red eye sometimes creates two fake duplicates of itself before attacking, and the green eye rapidly fires multiple projectiles.

This Rangda Bangda, known as Rangda Bangda W (ランダ・バンダW, Randa Banda W)[3] is a modification that appears in Mega Man X5, in the second stage of the Zero Space. It is designed with an Egyptian themed look and a remix of the fortress boss music from the original Mega Man X.

It has three eyes, each with a different color and attack, that appear one at time from one of the two eye cavities. The blue eye will move straight in X's direction, the green eye will shoot, and the red eye will spread several projectiles in two directions. When the walls move in to limit the player's movement, a small, miniature sun-like object will follow the player and spikes will appear on the floor, and if it is at low health, on random portions of the wall. It is recommended to use X equipped with the Gaea Armor against it, as the armor's immunity to spikes, ability to cling to walls, and its high damage output nearly trivializes the fight altogether. In addition, Rangda Bangda W has a specific weakness for each of its parts. 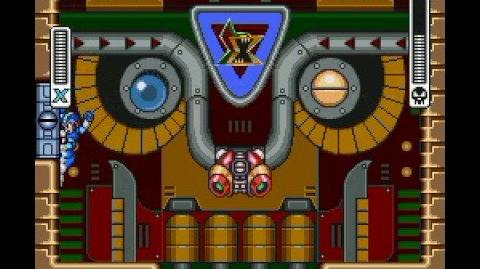 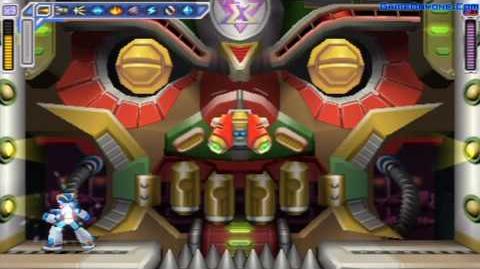 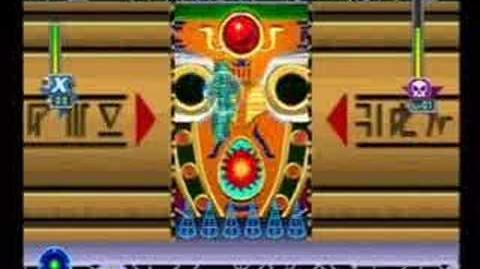