Raoul (ラウル, Rauru) is a local in Netopia's Underground and also the operator of ThunderMan.EXE. He comes from NetFrica and frequently speaks about the pride of his tribe. Lan Hikari and MegaMan.EXE first met him on their visit to Netopia.

Raoul is proud of his heritage and NetBattles for its honor and pride. He is somewhat serious but in the anime, he can act goofy and has a liking for funny hats.

Raoul appears in the Underground in Netopia and he has to be battled in order to gain access to the stereo comp. After he is defeated, he'll give Lan a P Code to get to the Netopia Area. He can be challenged for rematches where he states he fights for the honor of his clan. After defeating him, the other residents of the underground respect Lan. He was also part of the Secret Netbattler Conference before it was infiltrated by a mole. He managed to get through most of the traps, although he ended up hit by one (implied to have supplied him with burns) and injured him, although the injuries weren't immediately fatal. Lan managed to discover him, but Chaud assumed him to be the Gospel mole due to Lan's position over Raoul, although Raoul after the fight regained consciousness long enough to inform them that neither of them were the mole, and gave a hint as to the mole's identity.

He appears only briefly during the N1 Grand Prix where he states that he is battling for the pride of his clan. He is defeated by Chaud in the quarter-finals and drops through the floor.

Raoul enter the Red Sun/Blue Moon Tournament and helps Lan lift a curse before their battle, then he is defeated.

Raoul isn't present in the game, but he is mentioned by Dingo in the end of the Team Colonel version.

Raoul appears in another country that Lan visits on his trip around the world. They have an intense Netbattle and develop a friendship and rivalry. He reappears in the second season where ThunderMan and MegaMan meet in an arena on the net. Raoul helps MegaMan fight the Gospel beast but ThunderMan is absorbed.

Raoul appears again in the anime when MegaMan is too badly damaged to battle. He and ThunderMan came to Electopia in order to chase BrightMan.EXE who deleted one of his NetNavi friends. Raoul and Raika clash at first but they are on friendlier terms after Raoul saves Raika and helps him defeat the four Darkloids, deleting BrightMan in the process.

Raoul makes his final appearance when Lan starts to become overconfident after his success in battling the Darkloids. He and Chaud dress up in 70's attire and pose as agents of Nebula with ThunderMan disguised as a Darkloid to teach him a lesson. The disguise manages to trick Lan even though MegaMan points out Darkloids don't have NetOps. However a real Darkloid shows up and ThunderMan gives his Double Soul to help MegaMan defeat him. Afterwards they explain to Lan the reason they disguised themselves and tricked him. Raoul returns to his home country later with a present given to him by Chaud. It is a hat that resembles ThunderMan's head which he wanted for a while.

Raoul and ThunderMan are members of Mr. Famous's Bastion. Raoul located the source of the Dark Power, informing it to Sean and Lan. They are attacked by BeastMan, who is too fast for ThunderMan and MegaMan, but ProtoMan saves them. 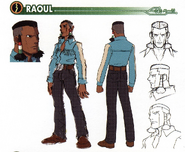 ThunderMan.EXE and Raoul in Mega Man NT Warrior (manga).
Add a photo to this gallery
Retrieved from "https://megaman.fandom.com/wiki/Raoul?oldid=323739"
Community content is available under CC-BY-SA unless otherwise noted.