Ray Bit (レイビット, Reibitto) is a rabbit Mechaniloid from the Mega Man X series that was originally part of a robot zoo before being modified by Mavericks. It shoots laser beams from its ear-like laser guns. They appear in Chill Penguin's stage in Mega Man X.

Dark Ray Bit (ダークレイビット, Dark Ray Bit) is a black colored version of Ray Bit that appeared as a Team Battle Boss in Rockman ×over.

Rabbit makes an appearance in the Rockman X manga in the area controlled by Chill Penguin and as of the Maverick minions surronding X and Zero in the forest.

Ray Bit also appeared in Sigma's base in Sonic Universe #76. 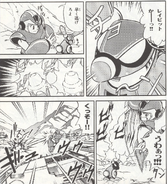 Retrieved from "https://megaman.fandom.com/wiki/Ray_Bit?oldid=316707"
Community content is available under CC-BY-SA unless otherwise noted.