Mega Man Star Force 3
Red Joker (レッドジョーカー, Red Joker) is one of two Finalized Noise Changes of Mega Man in Mega Man Star Force 3, the other being Black Ace. The basis for its creation was Dread Joker. It is exclusive to the Red Joker version, and its abilities and folder focuses on delivering heavy, armor-piercing blows while also shrugging off enemy attacks.

Mega Man's appearance after having attuned to Noise through the Joker Program and completed finalization. Designed with super heavy armor plates, despite rather low mobility, this transformation features monstrous power output, protection from nuclear-scale explosions and powerful autonomous Noise irritations.

Possesses overwhelming offensive and defensive capabilities that allow him to mow down anything in his path like a tank. An opponent can be damaged merely by standing in front of his constantly generated waves of Noise. Only EM Wave Bodies attuned to Noise through the Ace Program have a chance of withstanding his onslaughts. 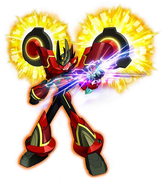 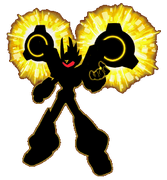