Reggae (レゲー, Regē) is a bird support robot created by Dr. Wily to make company for him when he was feeling lonely one day.[1]. However, Reggae is often very noisy and annoys Dr. Wily as he constantly laughs at the scientist's blunders and failures. Reggae is based on an Oriental Stork.[2]

His main purpose is to laugh at the player, appearing to the player that loses in Wily and Right's RockBoard: That's Paradise and when an invalid password is inserted in Mega Man 7. There is also a card of him in RockBoard that has various aleatory negative effects, like increasing the prices from properties, taking away Zenny from the player or destroying a building.

In Rockman & Forte: Mirai Kara no Chousensha Reggae can be bought from the item shop and when used, he will give Bass healing items similar to Eddie.

In the game Mega Man 10, Reggae has his own store and sells items and upgrades to Bass in exchange of Screws.

Reggae is a chatty pet bird robot that Dr. Wily created for himself. In Mega Man Gigamix, Wily gives Reggae to Mega Man to act as a spy and cause trouble, but he is broken into pieces by Break Man. Later, Reggae is rebuilt and often appears alongside Dr. Wily, usually repeating some of Wily's quotes or making noises, making him get on the bad side of almost everyone he met. Due to this, Wily sworn to himself that he will make as many modifications as necessary to make his sidekick more likeable. Reggae rarely fights, but it was shown he and Wily are able to defeat Beat with few attacks.

Reggae first appears during the Worlds Collide event, where he-along with Orbot, Cubot, and various other minions-are found aboard the Wily Egg assisting or annoying Dr. Wily and Dr. Eggman. He makes his full debut in the Mega Man series as a whole in Issue 54, where Blues took him along when ordered by Wily to abduct Kalinka under the threat of having his supposedly unstable nuclear core explode in a civilian populace.

Prior to making an appearance in the actual comics, Reggae appears in the "Short Circuits" from Archie Comics' Mega Man, starting with issue #10, where he perches on Wood Man's head. He also appeared in Issue 16's strip, accompanying an irate Wily to the Advanced Robotics Trade Show, only to turn around and leave upon seeing an explosion at the event (caused in the actual comic by the Emerald Spears terrorist cell). Issue 20's strip found him watching Wily's work on Police Man-and the disastrous results.

Front, side, and back view of Reggae. 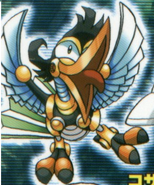 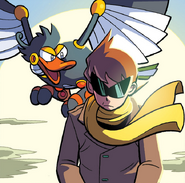 Reggae in the Archie Comics Mega Man series.
Add a photo to this gallery

Retrieved from "https://megaman.fandom.com/wiki/Reggae?oldid=277723"
Community content is available under CC-BY-SA unless otherwise noted.