Rei Saiko (西古レイ, Saiko Rei) is a character from the Mega Man Battle Network series. His NetNavi is FlashMan.EXE and is a member of the WWW.

In the games, Rei is very loyal to the WWW and Lord Wily. He is also ruthless and ambitious, attempting to kill Lan for a promotion. Rei does not readily accept defeat and after FlashMan is defeated, he often commands him to keep fighting, to the point of deletion.

In the anime, this ambitious nature is depicted with a "win above all else" mindset, as going so far as to allow his Asteroid Navi to ruin the race in order to not be seen as the loser. This is contrasted by him also lacking control under pressure, blaming his previous navi for the lack of success up until Slur arrives, and being rather emotional, as he looks the most distraught after Asteroid FlashMan is deleted out of the rest of Neo WW members (showing his attachment to his new navi, something unshown in the games).

Rei sneaks into Lan's school and breaks into the teacher's lounge to steal the TetraCodes for Lord Wily. When Mayl, Dex, and Yai arrive to try and stop him, Rei hypnotizes Lan's friends and makes them act like zombies. Lan runs away to avoid hypnosis and returns later with an umbrella. The umbrella deflects the hypnosis rays and allows Lan to jack-in and stop FlashMan. Lan and MegaMan.EXE defeat FlashMan.EXE, but Rei orders FlashMan to continue fighting. FlashMan explodes and leaves MegaMan with a bug.

He appears again in Castle Wily when Lord Wily is announcing his plans for world domination with the other WWW members. Rei hooks up to a Transmission chair and goes into the Cyberworld to help stop Lan. He uses Full Synchro to fuse with FlashMan and challenges Lan, but is defeated by him. He attempts to self-destruct, but KingMan deletes him.

He is briefly mentioned later, when they say that the WWW members are in the hospital.

Rei is one of the participants in the Battle Chip GP tournament. His name is written as "Ray".

He operates Asteroid FlashMan.EXE and operates a NetNavi-driven car. He joins the Neo WWW and plays an assistance role. He is one of the four members to have his mind erased by MegaMan DS, who had separated from MegaMan temporarily. 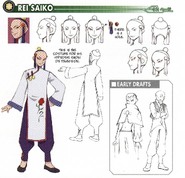 Concept art of Rei Saiko.
Add a photo to this gallery
Retrieved from "https://megaman.fandom.com/wiki/Rei_Saiko?oldid=284810"
Community content is available under CC-BY-SA unless otherwise noted.