"Telos" is perhaps referring to Omega himself, or to the end of Zero's "old business" with Weil and Omega.

The two main discs are named after the two Baby Elves who serve as antagonists, Créer and Prier (Crea and Prea in the English version of Mega Man Zero 3). 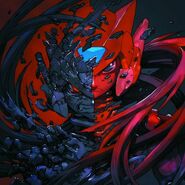 Retrieved from "https://megaman.fandom.com/wiki/Remastered_Tracks_Rockman_Zero_Telos?oldid=313706"
Community content is available under CC-BY-SA unless otherwise noted.