Against Enemies:
2 (per hit)

Remote Mine (リモートマイン, Rimōto Main) is Pirate Man's Special Weapon from Mega Man & Bass. When equipped, the user fires a remote mine that can be controlled by using the D-Pad and can be detonated by the player at any time. The weapon is capable of sticking on enemies and walls. Mega Man and Bass can use only one Remote Mine at a time, but Pirate Man can use three Remote Mines in a row.

Remote Mines are Ground Man's and Wily Machine's weakness. The player can prevent Ground Man from going underground by attaching a Remote Mine to him, as it will detonate when he attempts to dig. It can also destroy ice blocks. The Remote Mine can also be used to destroy the Green Devil in one or two hits (depending on the character) back at the Robot Museum.

Bass equipped with Remote Mine. 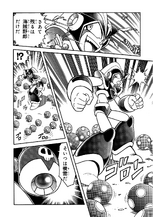 Mega Man firing a Remote Mine.

Remote Mine, attached to a surface.

Mega Man attaching a Remote Mine to an Ammoner.

Mega Man detonating the Remote Mine on the Ammoner.

Bass using his version of Remote Mine. Unlike Mega Man's Remote Mines, which are primarily black, Bass's are blue in color.

Bass detonating the Remote Mine. The color of the Mine's explosion is also different from Mega Man's.

Bass using Remote Mine against Ground Man in King Castle.