The Repliforce (レプリフォース, Repurifōsu), referred to as the Reploid Force in Mega Man Xtreme 2 and Mega Man X5, is a military organization of Reploids. Dr. Cain reorganized Repliforce into a new 'v3' program between Mega Man X3 and X4, in order to capitalize on the past successes of the Maverick Hunter v3 program. This reorganization was to compensate for the failure of Sigma and Dr. Doppler, conduct further Reploid research and development, and maximize overall Reploid efficiency.[1] It was also to provide support for the Maverick Hunters, to increase their response time and further reduce Maverick activity.[1]

Colonel boasted that the Repliforce was the most powerful military in history.[2] Although this was a boast meant to boost troop morale, Repliforce was undoubtedly a force to be reckoned with and possessed massive Reploid power. They were able to occupy multiple cities with ease during their rebellion, and fight a bloody war against the Hunters.

Repliforce had scientists working for them to help increase Reploid efficiency. These Repliforce scientists were the ones who created the Colonel and Iris, who were initially a single Reploid based on the persona of X as a Reploid with a peace-loving heart and a strong fighting spirit. The differences were considered irreconcilable and the project a failure, so the Reploid was split into two twin Reploids, with Colonel having the fighting spirit and Iris the pacifistic nature.

The Repliforce were shown to be quite ruthless during their war for independence. Despite their leader General's proclamation that they were not betraying humanity, the Repliforce still belligerently occupied many cities during the war and went so far as to destroy an entire city for subterfuge purposes.[3]

The main soldiers of Repliforce were Reploids who were similar in appearance but wearing different armor. They were Reploids with red and white armor, Reploids with blue armor and Reploids with green armor. The red-white armored Reploids had pointed shoulder pads, the ones with blue armor had round shoulders and the ones with green armor also had round shoulders but with semi-circular pads covering them. These soldiers each wore yellow belts, with the red-white soldiers having a blue jewel on their belt, the blue ones having a green jewel and the green ones having a red jewel. These soldiers used Ride Armor to battle opponents.[4]

The Repliforce had Knot Beret Reploids as part of their forces, and these soldiers mainly used bombs and guns as weaponry. Some of these Reploids were present at the Sky Lagoon and attacked the Hunters when they came to rescue the city from Mavericks, which may have played a part in fueling suspicion that Repliforce was behind the attack on the Sky Lagoon.[5]

At some point, the Repliforce had ownership of the Space Shuttle[6] which would later be used by the Hunters after the war with Repliforce months later to destroy the Eurasia colony.

In Mega Man X4, the Repliforce was collectively branded as a group of Mavericks, because it was believed that they had attacked the Sky Lagoon, an act really committed by the traitorous Maverick Hunter Magma Dragoon, who had personally sought a battle against Mega Man X. In return for this accusation, their leader, General, retaliated by pushing a movement for Reploid independence, an act that the Maverick Hunters viewed as a coup d'état. In reality, Sigma was pulling all the strings, manipulating events from behind the scenes. A significant blow to the Repliforce was the settling of the conflict which would later be known as the Great Repliforce War, resulting in the deaths of the organization's two major figures, Colonel and General. Iris, the Colonel's sister, was also a victim of the conflict as well via a tragic and misunderstanding battle against Zero which had led to Iris' death. General's sacrifice to destroy the Final Weapon and stop it from annihilating the Earth would ultimately clear Repliforce's name, with the survivors of the organization leaving without being targeted by the Hunters and the leader of the Hunters resigning in shame over the war.

The Repliforce damaged multiple space colonies during their short pilgrimage in space. They were all eventually repaired after the war's conclusion, with the exception of the Eurasia colony due to the machinations of the malicious bounty hunter Dynamo.

Some months later, the former director of the Repliforce Air Wing Spiral Pegasus, gathered the remnants of the soldiers of that division and overseeing an Air Force base staffed with the remnants of Repliforce's air wing near Western Norway, also known as the Reploid Air Force. Fortune would not smile upon him for long, as the Eurasia crisis during Mega Man X5 again ensnared him in the Maverick conflicts. When Sigma spread the Maverick Virus all over the Earth, Pegasus and the airport he was in charge of were heavily infected. When the Maverick Hunters' came to him to request his Orbital Wing to help destroy the descending Eurasia colony, he instead informed them of his Maverick condition, and requested that they defeat him through battle one last time to finally give him peace. The Hunters' accept and after a decisive battle Pegasus is killed, giving the soldier an end to his long battles that had haunted him for so long.

Burn Dinorex, the former leader of the Repliforce Disaster Prevention Team, has been hiding out in a volcano. Without Repliforce's knowledge, he had created an illegal warehouse to hide weapons he had created using magma energy. Dinorex stayed in the volcano after the war's end in possession of a very important Booster Engine. When the Hunters arrived to ask for the Booster Engine so they could equip it on their Space Shuttle and destroy the descending colony, Dinorex foolishly insisted on fighting the Maverick Hunters, believing that they intended to retire him even when they outright told him that they wanted nothing of the sort. Dinorex was destroyed in the ensuing battle and the Hunters confiscated the Booster Engine to use for their shuttle and help save the Earth.

The organization is briefly mentioned twice in Mega Man X6, notably in Isoc's speech to the public where he mentions that both the Maverick Hunters and Repliforce are suffering due to the effects of the Zero Nightmare phenomenon. 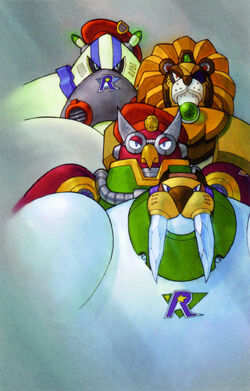 In the manga version of Mega Man X4, Rockman X4, the Repliforce appears as exactly the same type of group in the game: a military organization of Reploids who fight Maverick threats and occasionally assist the Maverick Hunters. The General is their leader, and the Colonel is their primary field commander. Colonel's sister, Iris, works for Repliforce as a nurse, although she treats both enemies and allies.

In the manga, the Repliforce had been around for considerably longer than in the game where they had only existed for a few months. The manga version of them has existed all the way back before Sigma launched his first rebellion against humanity, during which time the Colonel encountered Zero during a mission and befriended him. However, the group did not publicly assist the Maverick Hunters in quelling the rebellion as the high-ranking Hunters forbade it because of their pride. They did not want to ask for the Repliforce's help. Repliforce's inaction drew criticism from the public on the grounds that they were uncooperative.[9] The Hunters discretely borrowed some of Repliforce's power to help defeat Sigma, and were praised by the public for it in contrast to Repliforce, even though the Hunters' battles against Sigma caused a lot of collateral damage. Repliforce did work behind the shadows to engage in post-war reconstruction and help humanity recover from Sigma's numerous attacks, however. They supported humanity from the shadows.

In some capacity, the Repliforce was involved in the formation of the nation where the Hunters operate.[10]

When the Maverick Mechaniloid Eregion decimates a city and causes many casualties, Double from the 17th Elite Unit of the Maverick Hunters finds a piece of equipment with Repliforce's insignia on it next to the Maverick's corpse, and accuses the Repliforce of having engineered the incident. Colonel is snared with electrical chains from a hunter's gun, and Zero, who had just saved Colonel's sister Iris from the Mechaniloid, then asks Colonel for an explanation. He angrily breaks free of the chain, and refuses to disarm, saying it would be dishonorable to do so for a soldier such as himself.

The public is incensed at the fact that Repliforce could be involved, and many humans protest for a reduction of their troop size. The Maverick Hunters decide that Repliforce will be disarmed and temporarily disbanded until the investigation of their actions is complete. However, the day before that was supposed to happen, Repliforce blimps and airships appear across the sky, broadcasting a message to humans from the General at the Repliforce Memorial Hall. Indigant at being accused of Mavericks after working so hard to support humanity, the General announces they will become an independent organization, and that they have already occupied many areas and main roads to aid in their rebellion. He says they shall fight to the end. This causes the government to declare the Repliforce as Mavericks.

The moral ambiguity of the conflict is very much toned down in the manga, with the Repliforce being much more ruthless and depraved. Web Spider slaughters a battalion of Maverick Hunters who went to investigate Repliforce's hidden beam cannon in the jungle, which he was planning to use to burn down a nearby city full of humans. Slash Beast savagely killed one of his own Repliforce subordinates in anger after he reported to Beast that one of their trains had been stopped by the Maverick Hunters. Frost Walrus also slaughtered a squad of Maverick Hunters, and kept their dead bodies encased in ice as a sick part of his "collection". He later released several Maverick Hunter prisoners and told them to run for their lives, all so he could viciously kill each of them with his ice powers, save one, who was saved by X and Blizzard Buffalo, who was reformed in the manga as a hunter.

Eventually, Repliforce sub-commanders Web Spider, Storm Owl and Slash Beast are all terminated by X, while Jet Stingray is killed by an attack from the Reploid Self-Defense Forces. Frost Walrus is killed by the General himself as punishment for earlier misconduct such as starting riots unrelated to the Repliforce's coup and mercilessly slaughtering a battalion of Maverick Hunters and Reploids he had taken prisoner. Zero fights the Colonel twice, and is forced to kill him the second time in self-defense, just like in the game, while he is forced to kill Iris as well who had unwillingly bonded with her brother's remains and become a dangerous Ride Armor type Reploid.

X battles the General and seriously injures him at the Repliforce space station. In the end, Double reveals that he planted the evidence at the scene of Eregion's death to frame Repliforce for it, under Sigma's orders. X then kills Double, and General sacrifices himself to save humanity from the Death Flower satellite's beam weapon. Some Repliforce soldiers survive the incident and then leave in peace. 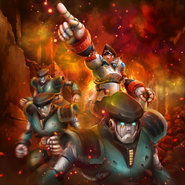 Repliforce in the TEPPEN card Sense of Duty 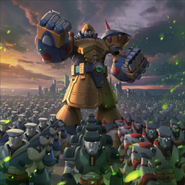 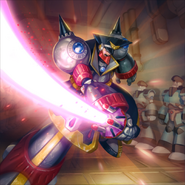 Repliforce in Colonel's card in TEPPEN. 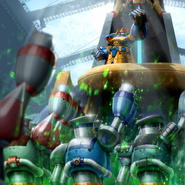