"I want to broadcast this feeling to the world!"
—Ribitta, after winning a Net Battle against Lan Hikari, Mega Man Battle Network 2

Ribitta (spelt Ribbita in MegaMan NT Warrior), known as Kero Midorikawa (緑川ケロ, Midorikawa Kero) in Japan, is an announcer of the DNN station and the operator of ToadMan in the Mega Man Battle Network series.

Ribitta is first introduced operating a news van outside the Official Center. Her NetNavi, ToadMan, is an optional boss in that game that can be fought by talking to her.

Ribitta wants to do a report on the Undernet and has her NetNavi go to End Area, but their interference results in Colonel's deletion. Feeling remorse, Ribitta tries to join Team Colonel and sends ToadMan to the UnderNet to battle MegaMan to prove it. Even though ToadMan loses, the battle was enough to convince the team to allow them to join and the two participates in their missions until Nebula's destruction.

In the anime, Ribitta, spelled as Ribbita, is the commentator or reporter of many events in the series, often revealing information to the audience. She has a substantial role during the N1 Grand Prix and the second half of the first season, but in Axess and beyond only has minor roles or makes cameos. 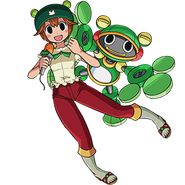 Ribitta, as seen in the first season of MegaMan NT Warrior.

Ribitta's sketch #2.
Add a photo to this gallery

Retrieved from "https://megaman.fandom.com/wiki/Ribitta?oldid=332023"
Community content is available under CC-BY-SA unless otherwise noted.