Ride Armor (ライドアーマー, Ride Armor) is the name for a giant mechanical armor that X, Zero, Vile, and Axl can pilot. As the series went on, more Ride Armors were created, each with different strengths and uses.

X can find two variations of the Ride Armor to use: A green version in Chill Penguin's stage, and a red version in Sting Chameleon's stage as well as Sigma Stage 2.

This Ride Armor can walk, dash, jump and punch enemies, but cannot climb walls. They can take a maximum of 16 hits before they start to flash. While flashing, no more damage can be taken. This is a good opportunity to "go berserk", as nothing else can negatively affect the Ride Armor. After a few moments, X is ejected from the machine and the Rider Armor explodes. There is no way to avert this.

Small grunt robots (Armor Soldiers) that appear on the aforementioned stages can pilot the Ride Armors as well, though with much less health. Their attacks however are very strong, so it is best to destroy them quickly and at a safe distance.

In its reboot Maverick Hunter X, the Ride Armors share a resemblance with the ones from X8, notably from its overall design and attack mechanism which is similar to Cyclops Ride Armor which utilizes piston punches.

"See the section below for information on Vile's Ride Armors." 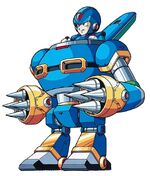 Mega Man X2 introduces the Rabbit Ride Armor (Ride Armor type EG-2 custom), a much improved model of Ride Armor that is also used by the Rideloid-G grunt enemies. It can be found in Wheel Gator and Crystal Snail's stages as well as Agile's X-Hunter Stage. Armed with spiked fists, it can destroy certain blocks that X cannot. By holding the fire button, the Rabbit Ride Armor can spin up its spikes and charge up a powerful attack. The spikes spin for as long as the fire button is held and will deal continuous damage to enemies that come in contact with them. Further, the Ride Armor is capable of dashing and changing direction while "charging". When the fire button is released, the armor dashes forward with a spinning spike punch attack. It can also hover for a short period of time if the jump button is held while in the air. Because of this, its dashing jump is able to clear extremely long distances. The Rabbit Ride Armor is also used in the Game Boy games Mega Man Xtreme and Mega Man Xtreme 2.

Mega Man X3 takes the Ride Armor system further than any other game in the series. Scattered throughout the levels are Ride Armor Modules, small chips that allow X to use a certain model of the Ride Armor type DRA-00. They can be activated at special Ride Armor platforms, very long platforms with a χ ("chi", Greek letter for Chimera/χιμάρα) on them. When X steps on one, he will be prompted to choose a Ride Armor out of the Modules he has. Each Ride Armor now has a visible life bar, so it is easy to tell when one will begin to flash. All Ride Armors except for the Frog Ride Armor will short out upon entering the water. 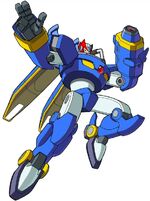 An upgraded version of the Hawk Ride Armor, the Eagle Ride Armor, is available in Storm Owl's stage. Iris takes on a similar form when she used her brother's control chip to battle Zero. By jumping in the air, the Ride Armor can hover for an infinite amount of time, and will only descend if jump is pressed, or if it is struck by an enemy attack. The Eagle exhibits enhanced offensive capabilities as well: uncharged shots are large masses of plasma and charged shots split into three rays that home in on enemies. This is one of the few Ride Armors in the series that can also perform an air dash. 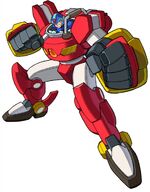 A Ride Armor resembling the earlier Kangaroo and Rabbit Ride Armors, the Raiden Ride Armor, is a mining Ride Armor found in Magma Dragoon's and Slash Beast's stages. It can survive an infinite amount of time in still lava, and can destroy certain rocked walls and train cars. Plus, for the first time in the series, the player can take the Ride Armor into a boss battle, in this case Magma Dragoon. The Raiden can perform a combo of two slashes if the fire button is pressed twice: a drilling stab and an overhead energy slash. It can perform a charged attack, which produces a lance of energy that is thrust forward. 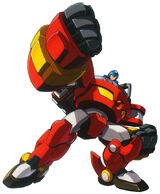 Mega Man X5 doesn't add anything new to the Ride Armor and family, and the two that exist are not used for very long. The Raiden Ride Armor is featured in the second part of Burn Dinorex's stage, which keeps the rider safe while underneath molten magma, and are also used by enemies in the same stage. This armor features a dashing slash attack that punches through enemies. There are also enemies known as Eagle G that use a modified Eagle Ride Armor with a buster that can shoot straight or diagonally and a shield, but the player can't use it.

Mega Man X6 only featured one instance of a Ride Armor — the Raiden Ride Armor, found in Metal Shark Player's stage. It can be used to avoid being crushed in the first compressor. However, a second Ride Armor will be available to the player if they enter the stage's Nightmare Area.

Mega Man X7 features two Ride Armors (Gouden and Raiden II) that can be used by the player. There are also enemies with Ride Armors known as Proto Ride, and Vanishing Gungaroo uses a Ride Armor in the battle against him, modeled after a mother kangaroo. 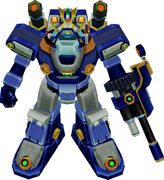 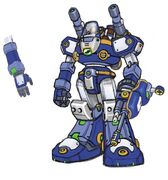 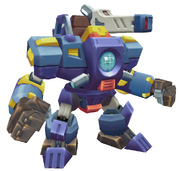 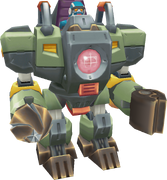 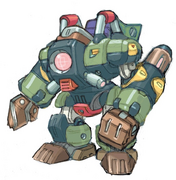 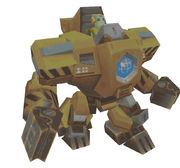 Ride Armor in Earthrock Trilobyte's stage.
Add a photo to this gallery

Vile is infamous for using Ride Armors throughout the series. His very first appearance is in a near-invincible blue Ride Armor that can grab and destroy Reploids with ease. However, Zero blasts the arm off of this one, and Vile retreats. In Mega Man Maverick Hunter X, Vile's use of the Ride Armor differs from X. It's more powerful due to the heavy machine gun, so the trade off is that Vile is only allowed use of the armor for 32 seconds. When time's up, if Vile exits the armor, or if it suffers too much damage over time, the armor will self-destruct. Though, it is possible to extend the armor's life by collecting weapon energy.

Vile uses another Ride Armor when confronted by X in the first station of Sigma Palace, this one with a purple chassis. The battle ends with X captured by the Ride Armor again, but Zero yet again destroys it, this time destroying himself as well.

When Vile is resurrected in Mega Man X3, X can warp to his stage from hidden portals in certain Mavericks' stages. After traversing through his many traps, X will face Vile. He has a modified version of the Kangaroo Ride Armor (known as DRA-00 in Japan) for the first bout. When it is destroyed, Vile fights X himself.

If Vile is not destroyed in his stage (done by utilizing his weakness), he will appear in the second stage of Dr. Doppler's Fortress. He will appear first in the Goliath Ride Armor (known as Brown Bear in Japan), weak against the Parasitic Bomb or the Tornado Fang, and when that armor is destroyed, he will fight X one-on-one.

Vile V uses the Devil Bear in Mega Man X8, a modified black Golem Ride Armor, when the Hunters fight against him in the entrance hall of Sigma Palace. The Devil Bear armor is nearly indestructible, but executing a Guard Break knocks Vile off of it, albeit temporarily, allowing the characters to fight him normally.

After the battle in Hard Mode, Vile and his Ride Armor survive (alhough one can easily see that the armor is spouting out smoke at the moment Vile reappears, suggesting that the Ride Armor isn't at all invincible), and preoccupies the reserve character while the other character must traverse the rest of Sigma's Palace alone. 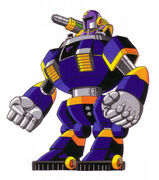 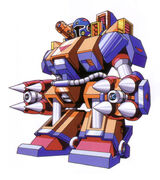 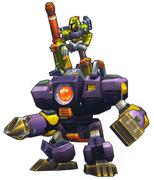 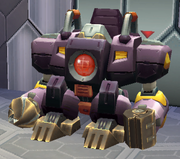 Retrieved from "https://megaman.fandom.com/wiki/Ride_Armor?oldid=288594"
Community content is available under CC-BY-SA unless otherwise noted.