Ride Boarski, known in Japan as Hellride Inobuski[1] (ヘルライド・イノブスキー, Heruraido Inobusukī), is a wild boar-based Reploid who is a member of the Red Alert syndicate and one of the Mavericks encountered in Mega Man X7.

Ride Boarski was a Reploid of average height with the appearance of a wild boar. His armor was primarily red and white, and he had a mohawk on his head and vents all over his snout. Various motorcycle features covered his body, such as handlebars on his shoulders, exhaust pipes on his hips, and wheels on his arms and legs, allowing him to take on the form of a vehicle.

Ride Boarski was noted for his aggressiveness as he had an an extremely touchy personality, well-befitting the actual nature of a wild boar. He had a great sense of pride, and disliked being lumped in with common thugs or motorcycle gangs. His temper was so out of control, he would go berserk at the drop of a hat, and if given the slightest insult, proceed to run down the target of his aggression. With his fierce, rebellious attitude, there was absolutely no way of reasoning with him, giving the Maverick Hunters little other option than to do him in. Boarski was fiercely loyal to Red, the leader of the group, and incensed that Axl "betrayed" the organization by leaving and joining up with the Maverick Hunters.

Boarski has the following attacks at his disposal:[2]

The upside to Boarski's charge attacks is that they force him into cooldown periods, leaving him vulnerable to attack as he rests. Zero's Bakuenjin is possibly the most effective single attack to use against him, but unfortunately its energy cost is too high to be used repeatedly. Zero can work well in this battle as Boarski will take a decent amount of damage from just his saber strikes alone and his double jump is useful for avoiding many of Boarski's attacks. X is also very effective using his fully charged buster shots at long-range, and Circle Blaze when Boarski is close and resting.

In the Japanese version, Ride Boarski speaks like Bōsōzoku (暴走族). Even in dialogue, X order him to disband his Bōsōzoku. However, he does not consider himself it, even though he called himself "sōchō" (総長, Bōsōzoku's leader).

X: So you're the big cheese? Ride Boarski: Big cheese?! Arggghhhhmm! How dare you call me that! I'm the Head Honcho, for crying out loud! X: OK, whatever you say. I order you to disband this motorcycle gang! Ride Boarski: Motorcycle gang?! Why you!! You've gone too far! I'll make you pay for this, with a duel!

Zero: Are you guys remnants of the Road Attackers? Ride Boarski: Argghaa! How dare you group us with those punks! You'll get it for this! Zero: Oh, so you must be the Road Riders, then? Ride Boarski: Oink-wa--! You...You...I'm gonna...I oughtta... Arrghyaaa! WHY, YOU!!!!!

Axl: Hey, honcho. I'm here to defeat you. Ride Boarski: Why you!!! Red gave you a home - and this is how you repay him?! You worthless upstart! Axl: Dude, you're breathing's getting heavy. Calm down. Anyway, in a way this is exactly how I'm repaying Red. Ride Boarski: Oink-wa--! You brat! I oughtta take the likes of you and...!! A duel! Just you and me! Yeah!

Ride Boarski appeared alongside other members of Red Alert and Mavericks from most of the Mega Man X series games during the crossover Worlds Unite. 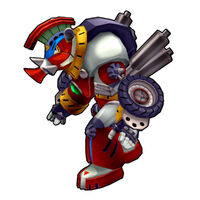 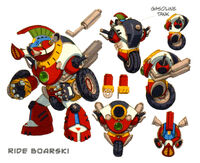 Retrieved from "https://megaman.fandom.com/wiki/Ride_Boarski?oldid=359341"
Community content is available under CC-BY-SA unless otherwise noted.