Ride Chaser (ライドチェイサー, Raido Cheisā) is a vehicle from the Mega Man X series, introduced in Mega Man X2 as a quick form of transportation with weapons. Some enemies are also seen piloting Ride Chasers and use them to attack the Maverick Hunters.

A Ride Chaser is a type of advanced cycle recognizable for the lack of wheels, relying instead on hovering technology. Ride Chasers serve the purpose of allowing the player to traverse a stage quickly. In Mega Man X2, Ride Chasers could be boarded and abandoned in the same way as Ride Armors, but from Mega Man X4 onwards, those are exclusive to "on rails" stages, where the focus is usually to avoid obstacles on the way to the boss. Ride Chasers cannot stop or be dismounted in these stages, and crashing means instant death. The character will automatically leap off the vehicle upon reaching the end of the Ride Chaser section. In Mega Man X7 and Mega Man X8, the Ride Chaser stages follow a vertical flow, making use of the 3D perspective. Unlike Ride Armors, the pilot will take damage when hit while using a Ride Chaser.

Although the Ride Chaser designs vary significantly, they usually retain the same features: a frontal cannon and an optional turbo boost.

In The Day of Σ, X and Zero use unnamed Ride Chasers. X also uses the Rider Chaser in a highway in the game's ending. Before leaving the building with the Ride Chaser, X looks to Zero's red Ride Chaser for some seconds, remembering his recently deceased friend. 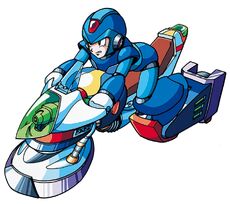 Mega Man X2 introduces the first Ride Chaser to appear in the series, the Ride Chaser ADU-T400 turbo "Cheval" (チェバル, Chebaru).[1] In the introduction scene and at the beginning of the Opening Stage, a CPU-controlled X and a green Maverick Hunter ride one towards the Maverick factory.

Later, in Overdrive Ostrich's stage, X has full control of the Cheval. It constantly moves forward at a fast pace, and it can accelerate even more and turn around, albeit slowly. It can fire small shots and dash along the ground, as well as jump. Unfortunately, like the Ride Armors before it, other enemies, the Road Riders, may pilot the Ride Chasers as well.

It is also known as Mobile Attack Cycle in North American release of Mega Man X2.[2] 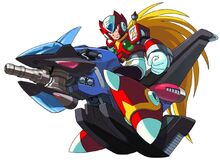 The Adion (アディオン, Adion) is a type of Ride Chaser that the commander of the Maverick Hunters obtained to be used in the Repliforce War.[3] X and Zero ride an Adion through Jet Stingray's marine base in Mega Man X4. A new feature of the Adion is the option to perform an offensive dash, which can also be performed in the air. Any enemy that comes into contact with the Adion during a dash will be incinerated by its drive blade, but it is a risky maneuver, as the pilot has little control during the dash.

The Adion is also used in the beginning of Volt Kraken's stage in X5 to pass by its rough terrain.

In Jet Stingray's stage, some enemies ride the Hornet, an illegally-modified version of the Adion.

Mega Man X7 has an unnamed Ride Chaser that is used by the Maverick Hunters in Ride Boarski's stage to collect bombs before they explode. 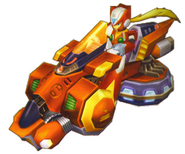 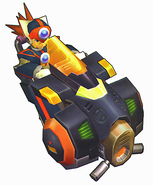 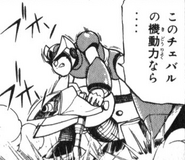 Retrieved from "https://megaman.fandom.com/wiki/Ride_Chaser?oldid=337787"
Community content is available under CC-BY-SA unless otherwise noted.