Rightot'n Half-track (ライトットンハーフトラック, Raitotto n Hāfu Torakku) is a half-track in the Mega Man series created by Auto (Rightot), who claims that it is the fastest track in the world. It is mainly used for making purchases outside of Dr. Light's Laboratory.[1] Its license plate is WC072.

Auto's half-track first appeared in Mega Man Issue 23, during the news report on Mega Man, although it was partially obscured by various reporters swarming the vehicle. It made it's full debut in Sonic Universe #76, where Mega Man uses it to go to the town and pick some materials for Guts Man. When the Deadly Six appear from a Genesis Portal to attack him, the vehicle's front is smashed by Zomom. Due to Xander Payne warping reality, this battle was erased from history, restoring the half-track to its pristine state.

In the story "Metal Heart" from Mega Man Megamix and Rockman Remix, the half-track is used by Auto to transport everyone present to the building with the Mother Computer. Due to the excess of people on it, Top Man, Snake Man, and Spark Man are left behind, and his half-track ends up with a flat tire.

In the story "Burning Wheel" from Mega Man Gigamix, Auto used Rush and Item-2 to create the Rush Roadstar so he could enter the Battle & Chase, and he also made the Super Adapter in the process. However, doing so left Mega Man without a transport, and as he needed one, he angrily takes the Rush Roadster from Auto. Without choice, Auto still enters the race with his half-track in hopes of winning, but as its maximum speed is 150 km/h and the average speed of the leading racers is over 400 km/h, he is left behind. At one point he accidentally runs over Slash Man, and when he passes by Bass, who is attempting to pursue Mega Man on foot after crashing, Auto calls him an idiot. Bass heard what Auto said and increases his speed to catch him and takes a ride with Auto to reach Mega Man, often complaining of the speed and hitting Auto's head. In the end of the story they are still on the road at night long after the race's end. 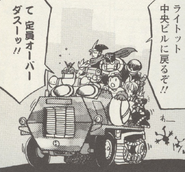 The half-track in Mega Man Gigamix.

Half-track in the Rockman 7 manga.
Add a photo to this gallery

Retrieved from "https://megaman.fandom.com/wiki/Rightot%27n_Half-track?oldid=297043"
Community content is available under CC-BY-SA unless otherwise noted.