Amount of shots/hits from Special Weapons it takes to destroy a Mono Roader.

Camon (カモーン, Kamōn) is a prototype enemy from Mega Man 5 similar to the Mono Roader and like them, they only attack by driving in a straight path. Camons are seen only in Crystal Man's stage.

Appearing in Mega Man 6, the Twin Roader (ツインローダー, Tsuin Rōdā) is a lot like the Camon from Mega Man 5, only they have two wheels and the ability to turn around. They appear in the stages of Tomahawk Man, Knight Man, and Wind Man.

Cannon Roader (キャノンローダー, Kyanon Rōdā) is an enemy from Mega Man V similar to a rocket with a wheel. They appear in the stages of Saturn, Uranus and Pluto.

4 Roader (４ローダー, 4 Rōdā), shortened to Roader outside Japan, is a four wheeled Roader from Mega Man: Battle & Chase. They are one of the three standard enemy racers in the game. An enhanced version named Black 4 Roader (ブラック４ローダー, Burakku 4 Rōdā) appears as part of the Black Troop.

The first part of their name, Sepa (セパ), is taken from the word, separate (セパレート). 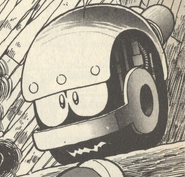 Mono Roader in the Rockman 4 manga.

Camon in the Rockman 5 manga. 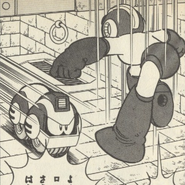 Twin Roader in the Rockman 6 manga. 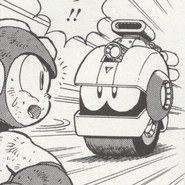 Turbo Roader in the Rockman 7 manga.