A "robotic copy" is a robot double of a human that is used to trick others into believing that it is the original.

A fake Dr. Wily pilots the Wily Machine 3. When Mega Man defeats Dr. Wily, the robot's head bounces with a spring on its neck, revealing the imposter.

Dr. Wily created a robotic copy of Dr. Light to incriminate him, using it in a video where Dr. Light offers him to conquer the world. In the game's ending, Wily uses it in a trap to destroy Mega Man, but Proto Man saves him.

A robotic Wily with gray skin and a red triangle in the forehead pilots one of the Wily Capsules. The decoy can't be damaged, his head bouncing with a spring neck when hit.

In the "Search for Wily" course, a fake Dr. Wily with a spring neck appears after defeating one of the six bosses and drops the new parts. Based on the dialogue, Mega Man, Bass, and Duo were easily tricked by the fake (with the latter two even trying to kill Wily by shooting him [Bass] or charging [Duo]), while Proto Man apparently deduced that the "Wily" surrendering was a fake all along.

The fake Dr. Wily with a spring neck appears in the beginning, being used in an attempt to crush Mega Man.

In the episode Bro Bots, Dr. Wily plans to take over the city by replacing important persons, such as the governor and Dr. Light, by robotic fakes.

Before using a robotic copy, Dr. Wily used holograms as decoys in issue 8 and 12 (Alien). An actual robotic decoy was first used by him in issue 47, piloting the Wily Machine 3. The decoy only says "Hahaha! Prepare to die, Mega Man!" repeatedly.

The Copy Mega Man tries to kill Dr. Wily, but he finishes a decoy of him.

Later in Mega Man Gigamix, a decoy of Wily was used by Shade Man to help him escape from the white alien robot.

Dr. Wily captured Dr. Light and replaced him by a robotic copy, which convinces Mega Man that Dr. Wily has changed and joined forces with the Wily Patrol and increasing its strength. While Mega Man was away helping the Wily Patrol, the imposter dismantled Roll and Dr. Light's other robots and leaves, but they are later found and repaired by Dr. Cossack. When Mega Man faces Wily, the Light decoy holds Mega Man for Wily, but Proto Man appears with the real Dr. Light and destroys the fake. 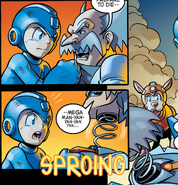 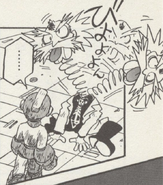 Fake Dr. Cain in Rockman X3.
Add a photo to this gallery

Retrieved from "https://megaman.fandom.com/wiki/Robotic_Copy?oldid=304674"
Community content is available under CC-BY-SA unless otherwise noted.