A rocket (ロケット, rocket) is a vehicle used to obtain thrust from a rocket engine by pushing the rocket forwards simply by throwing their exhaust backwards extremely fast.

When Mega Man Volnutt got stuck in Elysium at the end of Mega Man Legends 2, Roll Caskett and Tron Bonne teamed up to create a rocket to rescue him, but their initial attempts didn't work and kept exploding during flight. Teisel Bonne laments with Barrell Caskett and Verner Von Bluecher that the rocket shown in the ending was the tenth rocket they built. Not to be discouraged, Roll and Tron mutually refuse to give up on Mega Man, but shut Data's suggestions out over their heated disagreements on the schematics.

In the cancelled game Mega Man Legends 3, the 28th rocket was under development in Klickelan Island, and Roll had a Rocket R&D Lab. The game's official site had a "Rocket Development Progress" section that represented the game's completion, with images of the rocket's development and three Servbots talking.[1] It had six entries between November 16, 2010 and April 19, 2011 before the game's cancellation on July 18, 2011. In the 25% completion update, Servbot #33 says that the 27th rocket launched straight into the city. As both the English and Japanese rocket development pages were stored in Capcom's Japanese site, the English pages were removed when Capcom closed the Japanese Devroom.

Wily planned to launch a rocket containing the Life Virus to hack military satellites and destroy all network systems, but his plan is stopped by Lan and MegaMan. With the Life Virus deleted, a virus leak causes the rocket and all system from the WWW Research Facility to malfunction and self-destruct.

At the beginning of Chapter 3 from the crossover Project × Zone, Servbot #1 mentions that the production of a rocket will be delayed further due to several events.

Minna to Capcom All Stars and Street Fighter × All Capcom

Rockets were used as the gacha from the games.[2]

Commander Beef used a rocket to travel to the Moon in the episode To the Moon!.

A rocket in Minna to Capcom All Stars 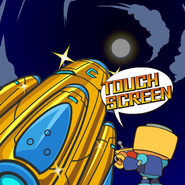 A golden rocket in Minna to Capcom All Stars 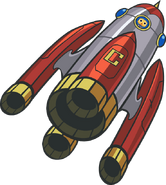 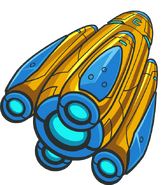 Now gathering resources! (29%)
Add a photo to this gallery

Retrieved from "https://megaman.fandom.com/wiki/Rocket?oldid=304019"
Community content is available under CC-BY-SA unless otherwise noted.