watch 02:34
Wiki Targeted (Games)
Do you like this video?
Play Sound

Digital Download
Rockman.EXE Phantom of Network (ロックマンエグゼファントムオブネットワーク, Rokkuman Eguze Fantomu obu Nettowāku) was released in 2005 for au mobile phones and again in 2009 for docomo branded phones to the Japanese public via the i-mode Internet service. The game requires a 315 Yen (about $3.80) monthly fee for au mobile phones and 525 Yen (about $6.55) for docomo phones (including taxes).

The game takes place in the year 200X and consists of eight unique chapters, each of which were released on a set release schedule.

Story elements from Phantom of Network were loosely adapted in Rockman.EXE Beast+ as the final storyline of the Rockman.EXE anime series.

In Densan City, Akihara Town, resides the sixth grade elementary school student Netto Hikari. Although his school studies are a little poor, his virus busting skill is top notch. His Navi Rockman is his best friend. After leaving school one day, Meiru asks Netto to check on her PC which is seemingly in bad condition. Netto plugs Rockman in, and in far into the system Rockman discovers a mysterious ball of light. The ball of light transforms into the figure of Fireman who had been defeated before, and attacks Rockman![1]

After talking to his father about the incident of the ball of light at the science bureau, Netto goes to school to turn in some forgotten homework. There he meets Mr. Hikawa of the waterworks bureau. He explains that while the water service equipment was under maintenance, an accident occurred causing the cyber space of the equipment to freeze. The exit is frozen, and it is impossible for Iceman to get out. Netto and Rockman head off to rescue him. Rockman is plugged in to find the cause of the trouble, and what he finds at the end of the cyber space is...![1]

Shuuichi Eboshi, transferring from another school, enters the same class as Netto. Netto learns from Dekao that a net battle tournament is being held, and goes to Densan Dome. When he gets there he happens to run into Enzan who is on guard duty. An incident comes up in the net battle tournament. Something has invaded a net battle machine! Netto plugs Rockman in, only to encounter the same thing again...[1]

With gratitude for fixing her PC, Meiru invites Netto to go see a magic show with her. However, while they're at the show, trouble starts to brew in the tent cyber world. Fearing a connection with a series of incidents, Netto and Rockman come forward to the solution. When they plug-in they do not find the ball of light as expected from earlier, but rather they find Hatman. Although Hatman is the Navi of Shuuichi, who is a new classmate of Netto's, could he really be related to the incidents?[1]

Shuuichi Eboshi: The son of Mr. Hat and operator of Hatman. Because of his father's work, he moves to the same school Netto attends. Because his father is always busy and doesn't care much, Shuuichi is often feeling loneliness and dissatisfaction.[1]

Hatman: Shuuichi's Navi. He is skilled with attacks following a magic motif, being able to pull roses and swords out of thin air and producing things from his silk hat.[1]

Mr. Hat: This famous magician is Shuuichi's father. He is always on the move in order to entertain people everywhere.[1]

Chapter 5: Phantom of the Network

While the cause of the previous incidents is gradually becoming clear due to the results of data analysis, someone trespasses onto the server of the PET making IPC corporation. Enzan is shaken and impertinent over his father being taken hostage. Netto brings Enzan back to his senses with a net battle, then the two cooperate together and send their Navis to the deepest part of the server, where they find Shadowman. Meanwhile, in surveying the determination of the criminal, Yuuichirou proceeding with the investigation and going over the answers, finds something unexpected.[1]

A grand investigating initiative on behalf of the science bureau is started to find a solution to the incidents. Netto also receives direct request from his father. Netto and Rockman go into the mobile area where electronic jamming has been flying about wildly. In the deepest section of the area they encounter the mysterious Navi - Jammingman.[1]

Virus outbreaks are occurring in great quantity all over the world, leaving the cyberworld in a paralyzed state. Amidst all this, Netto and Rockman go through a hole in the cyberworld, and press on the exploration. The destination they arrive to is a mysterious, monotone colored cyber space. What's expected here...? A mysterious voice echoes to them. Finally Netto has reached the true mastermind of the incidents![1]

Netto and Rockman come to find the inciter of the incident's true identity. Netto's father now resorts to participation request strategy, for the sake of protecting peace, one large plan involving net battlers around the world is started. Recognizing Netto's ability for battle, many net battlers come to him cooperation, and the final battle begins![1] 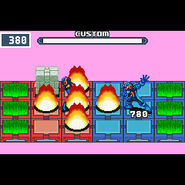 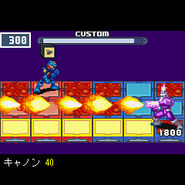 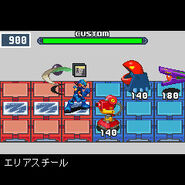 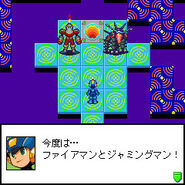 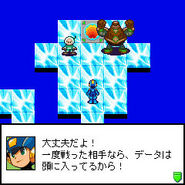 Retrieved from "https://megaman.fandom.com/wiki/Rockman.EXE_Phantom_of_Network?oldid=355125"
Community content is available under CC-BY-SA unless otherwise noted.