MMKB
Register
Don't have an account?
Sign In
Advertisement
in: Articles in need of expansion, Anime, MegaMan NT Warrior pages

"Be Somewhere" by Buzy

The film Rockman.EXE: Hikari to Yami no Program takes place within Stream's story, occurring between episodes episode 22 and 29.

Stream takes place a few months after Axess. Duo's comet has been sighted passing over Earth and people are trying to figure out it's significance. While stuck in traffic, Netto Hikari and his friends are attacked by giant viruses. Netto and Enzan Ijuin use Cross Fusion to fight it off. Then Rockman is kidnapped by Forte and he tries to steal his Ultimate Program. However Blues arrives and fights him off. Later while fighting more giant viruses, they are brought to Duo's comet where he proclaims that he will destroy the Earth because it is filled with evil. However, Cross Fusion intrigues him and he decides to allow Earth one more chance to live. Forte is banished to the Undernet by Slur and the Neo WWW is formed. Netto and Enzan gained the Crest of Duo and a new battle is about to start.

In most of this series, characters face various situations, in which they usually ultimately cross fuse with their NetNavis to solve them. Most of the characters who can use Cross Fusion receive a Synchro Chip from Dr. Hikari and Meijin, although Yuriko Ozono makes a reappearance with her own Synchro Chip given to her by Dr. Wily, and Barrel (from the past), the last characters to join the team, also receives a Synchro Chip from Wily that seems to look slightly different. Most of the characters in this series who can use Cross Fusion also receive the Crest of Duo, but they do not actually see Duo as Netto and Enzan do, and a few times Netto explains what they are. These characters ultimately join to become the Cross Fusion team. Later on in one episode, many characters from the team get together to explore some ruins that are barred by a natural Dimensional Area, and while inside they use their Crests to protect themselves from unusual entities bearing the crest.

Many antagonist Navis from Axess also reappear in this series, but most were created by Duo. These Navis are usually bestowed upon ordinary humans with normal Navis by Slur. Dr. Regal also makes a return from his appearance in Axess, and Dark Rockman also appears as a major antagonist and a recurring threat to the heroes. In this series, Dark Rockman had his own origin story (revealed in the episode Battle of One Without Bonds), and was created by Dr. Regal to be a clone of Netto's NetNavi, Rockman, contrary to his appearances from the games. After a long battle with Rockman, the clone is stabbed through the chest by Slur, who then tries to delete the others next. However, Dark Rockman activates his Battle Chip Salamander as a last resort, and allows Rockman, Blues, and SearchMan to escape while he sacrifices himself to delete Slur. What's left of his data combines with Rockman. 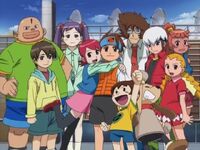 Shuhei Naruse takes the role of Music Composition from Jun'ichi "IGAO" Igarashi. However, many of Axess' tracks continued to be used throughout the series.