One day, Dr. Light, Rock, Roll, and Rush set out on a picnic. When Roll went to pick some flowers alongside Rush, she is kidnapped by Plant Man. Rush returns to inform what happened, and Rock changes into Mega Man to save her. Inside a fortress, Mega Man finds Plant Man and they fight. Dr. Wily appears inside a Wily Machine to face Mega Man, but as Proto Man appears to help, Wily decides to run away and let Plant Man handle them. Mega Man and Rush combine into Super Mega Man to follow Wily, and the Wily Machine is destroyed by a rocket punch. Wily escapes in a parachute, yelling that he will get Mega Man. Later, Roll is found safe and sound, and Plant Man was returned to his normal self thanks to Dr. Light. 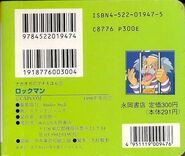 Retrieved from "https://megaman.fandom.com/wiki/Rockman:_Dr._Wily_wo_Yattsukero!!?oldid=308001"
Community content is available under CC-BY-SA unless otherwise noted.