Rockman Tennis (ロックマンテニス, Rokkuman Tenisu) is a sports game released by Capcom in 2007 exclusively for Japanese mobile phones via the i-mode Internet service.

Rockman Tennis is a tennis game that features seven playable characters, each character with different stats ans a special move that can be used when the special gauge is full. The special gauge fills with each shot or by taking Weapon Energy when one appears. The game features a League Battle mode with four cups and a Free Battle mode where the player can have custom matches. With each victory, the player gains Screws that can be used in a shop to purchase items from Auto.

Each character can equip two items. 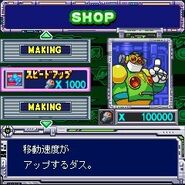 Shop
Add a photo to this gallery

Retrieved from "https://megaman.fandom.com/wiki/Rockman_Tennis?oldid=259975"
Community content is available under CC-BY-SA unless otherwise noted.