Rockman The Puzzle Battle (ロックマン ザ パズルバトル, Rokkuman za Pazuru Batoru) is a game released by Capcom on July 1, 2011 for docomo, au and SoftBank branded mobile phones in Japan. The game is currently available for download via Capcom's digital download service, and the i-mode Internet service for docomo brand phones.[1]

Puzzle Battle features an art style imitating graphics and sprites from the original Mega Man game. Gameplay involves swapping and alternating spheres next to each other in an attempt to line up three or more of the same color horizontally or vertically. If a successful combination is achieved, Mega Man will attack his opponent. Aligning four or more spheres in a row grants the player an extra turn. The battle is won when the Robot Master's life is depleted to zero and reminiscent to games in the Mega Man series, Rockman gains the defeated Robot Master's signature Special Weapon, which can be used to cause various board effects. [2] [3] There are no recovery items for Special Weapons, its energy can be gradually restored by clearing spheres. In addition to the six Robot Masters from the first Mega Man game, other bosses include the Yellow Devil, Copy Robot, and Dr. Wily. E-Tanks can be found amidst the puzzle board, and using them regenerates Mega Man's HP. Enemies can also get and use E-Tanks.[4] [5] 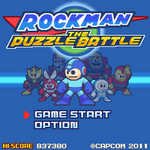 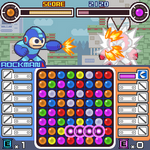 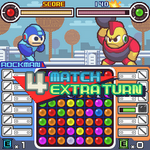 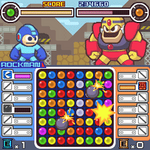 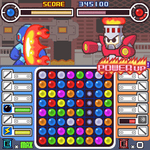 Rockman vs. Fireman
Add a photo to this gallery

Puzzle Battle features arrangements from the original Mega Man game, plus a new weapon get theme.

Retrieved from "https://megaman.fandom.com/wiki/Rockman_The_Puzzle_Battle?oldid=194357"
Community content is available under CC-BY-SA unless otherwise noted.