(NOTE: Although the cards use the original names from Japan, this summary will use the English versions for the sake of clarity.)

In a bid to take over the world, Dr. Doppler creates Limited, a Replibrain with the ability to evolve machines while taking control of them. Desiring combat data to further refine his creation, he sends his biomechanical parasites to revive four previously destroyed Mavericks: Flame Mammoth, Bubble Crab, Wire Sponge, and Boomer Kuwanger. In addition, Dr. Doppler also employs the Reploid assassins Curtiss and Schmitt to monitor the revived Reploids as they attack X.

X battles his reborn adversaries, starting with Wire Sponge. As the fight concludes, the Limited core fears for its survival and discards Sponge, attempting instead to merge with X. Although Zero thwarts the attempt by sniping its core, the remains of Limited cause the X-Buster to mutate into the Clear Buster, prompting Zero to investigate the situation as X continues to fight the Limited Mavericks; however, before he can interrogate any of them, a cloaked giant swiftly finishes off the Mavericks and retrieves their Limited.

After defeating the first four Mavericks, X confronts the giant, revealed to be Curtiss. He was given new orders from Dr. Doppler to take the Clear Buster, only to be done in by the new weapon. Near death, he begins to spill who is behind the Limited only to be silenced by Schmitt's cleaving hands much like his own previous victims.

Luckily, Zero's own investigation has led him to Dr. Doppler's research on "evolving cells," informing X and together tracking the Reploid scientist down to an abandoned factory. There, the combat data from the three retrieved Limited has already been applied in reviving Sting Chameleon, Storm Eagle, Flame Stag and Wheel Gator, now more fierce than ever. Upon defeat, the evolved Limited no longer require retrieval, tearing themselves out of the scrapped hosts on their own to escape deeper into the factory.

The Limited in X's Buster is also evolving, but the intense pain from its effects leave him unable to fend off Schmitt. Zero steps in and has the assassin on the ropes, but is injured when his opponent uses the paralyzed X as a liability. By this time, the Clear Buster has mutated further into the Clear High Buster, draining X's life to further power its attacks while also attempting to gain control over its host. Defeated, Schmitt seizes the opportunity to escape and be repaired by the Mother Limited, the entity producing all Limited organisms. However, the Mother Limited instead absorbs Schmitt and uses all the analyzed data on X to birth a Limited clone, iX.

Not only is iX a refinement over X's design, he also carries the abilities of all previously revived Mavericks as well as the absorbed Schmitt. X is outmatched against his evil copy until the Limited spreading through his body evolves again in self preservation, generating the Clear Armor. Struggling against the Limited's growing influence, X engages in a final attack against his clone, trading powerful blasts through the chest. It results in X's victory, narrowly dodging at the last second and letting only the Clear Armor be destroyed, finally freeing him from the parasite's control.

Back to his old self, X faces Dr. Doppler, who unleashes the Mother Limited on the Hunter. Still armed with all the data it had collected on X, the giant Limited shifts its body into Repligigant Mode, a towering humanoid attack form. Despite his damage, Zero rejoins X in the ensuing battle to bring the titan down with a Double Buster attack. The two Hunters escape the factory as it explodes, hearing Dr. Doppler's words echo inside their heads that his challenge is far from over.

This list includes the title in the front and the back of each card, in that order:

* This is the character known among fans as "iX".

In addition, the Mega Mission series also includes a set of nine "Jumbo" cards, these being at least twice as large as the regular set, and three Chip Shooter cards. The jumbo cards provide supplemental information to the series.

Jumbo Carddass are Carddass that are larger than the normal cards. Nine Rockman X Mega Mission cards were available. Those cards don't have names.

Jumbo Carddass that contain 15 chips (pogs) each, being in total 3 cards and 45 chips with several images from Rockman X Mega Mission.

No. 42
Add a photo to this gallery

Jumbo Card IX
Add a photo to this gallery

The story of Rockman X Mega Mission was adapted in a manga by Hitoshi Ariga titled Mega Mission in the Comic BomBom 1995 Spring Vacation Jumbo Special Edition. The story was later reprinted in Rockman Remix and Rockman Maniax. In August 2018 UDON announced that Mega Man X: Mega Mission will be released as a standalone, full-color comic. It was initially scheduled to be released in January 2019, but was later postponed indefinitely.[1][2]

X rushes to the point of his last communication from Zero, where he is attacked by a greatly strengthened and once destroyed Reploid. Zero reveals that a mysterious liquid (Limited) regenerates and strengthens the Reploid, but X also has a mysterious liquid-related anomaly. X's endless possibilities and Limited's evolutionary abilities create unprecedented events. 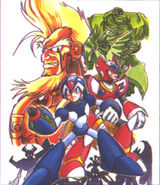 Retrieved from "https://megaman.fandom.com/wiki/Rockman_X_Mega_Mission_(Carddass)?oldid=348681"
Community content is available under CC-BY-SA unless otherwise noted.