Mega Man Star Force 3
Rogue Noise (ブライノイズ, Burai Noizu) is the secret Noise Change of Mega Man, with unique abilities. It can be considered Mega Man empowered with Mu technologies. It has the same encounter rate in both Black Ace and Red Joker, and cannot be stored by the Noism in Astro Wave 1 to revert to. True to Rogue's beliefs, Rogue Noise can only be acquired while the player has no real Brothers, and prevents him from forming any BrotherBands with other players as well. BrotherBands with in-game NPCs are unaffected by this Noise's restrictions.

A secret noise transformation, Rogue Noise is the embodiment of Rogue inside Mega Man. The ability to attune to Rogue Noise is limited to those people who individually pursue strength without relying on any sort of group bond. Because there are currently very few EM Wave Beings that can actually attune to noise, it's unlikely that anyone has actually witnessed this phenomenon.

Rogue Noise is definitely a powerful asset to those who have been unable to find Brothers, both in and out of multiplayer. Its lack of an element also means that the player has no weakness, and thus once Vibrant Noise is assumed the player stays in that state until they Finalize. This allows them to build Noise to reach a stronger Finalized folder without worry of losing their efforts when struck with a weakness. Its monstrous +50 bonus to Sword cards and removal of flinching from non-elemental attacks (due to inflicting temporary paralysis) turns the Sword Fighter series cards into heavy hitters, with the strongest in the series doing around 550 damage total, on par with that of most Giga cards. 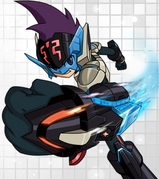 Rockman Xover Battle Memory
Add a photo to this gallery

Retrieved from "https://megaman.fandom.com/wiki/Rogue_Noise?oldid=281470"
Community content is available under CC-BY-SA unless otherwise noted.