"A cutter that goes through objects and returns."
—Mega Man Powered Up description (Mega Man)

Rolling Cutter (ローリングカッター, Rōringu Kattā) is Cut Man's Special Weapon, a versatile cutter made of ceratanium that can cut anything in half.[1] It has the form of a large pair of extremely sharp scissor blades that are thrown like boomerangs, flying in front of the user in a teardrop-shaped pattern, before returning to the person that used it.

Mega Man obtains Rolling Cutter after defeating Cut Man. This weapon is useful against Gabyoalls, as the Mega Buster has no effect on them, except to stun them momentarily. It causes rapid damage with contact. It is Elec Man's weakness.

Like the original game, Mega Man obtains Rolling Cutter after defeating Cut Man. In New Style it is Bomb Man's weakness, and it can cut his Hyper Bombs before they explode. It is one of the few weapons which can go through walls, others being the Ice Slasher and the debris from Super Arm.

When the player uses Cut Man, Cut Man is able to throw two cutters at a time instead of only one.

When facing Cut Man as a boss in New Style, Cut Man can throw a giant cutter in Normal and Hard difficulties. The Wily Machine also uses the Rolling Cutter.

Rolling Cutter is available from the beginning in the Wily Tower mode. However, it doesn't stand out much when compared with the other weapons available, like Metal Blade and Shadow Blade. Bosses don't take much damage from the Rolling Cutter, and Mega Water S and Iron Ball are immune to it.

Rolling Cutter is obtained after Cut Man's defeat. It is the weakness of Elec Man and the first form of the Wily Machine.

Rolling Cutter is obtained after defeating Cut Man in the "Mega Man 1~2" course. Up to three Rolling Cutters can be present on the screen, and if it miss a target and returns to the user, its weapon energy is also restored. It is Crash Man's weakness.

After defeating Cut Man in the "Rescue Roll!" course, the player must get the Special Weapon Item dropped by him before it disappears to obtain the Rolling Cutter. In multiplayer, only the first player to take the item will obtain the weapon. It functions like its previous appearance and is Shade Man's weakness.

In the cancelled game Mega Man Universe, the Rolling Cutter was teased to be one of the weapons available on its first trailer, with Mega Man looking to a Jazwares Cut Man figure and obtaining his Rolling Cutter by changing his arm (actually Mega Man's arm with the same color as Cut Man's arm), hinting at the game's customization feature. In the trailer the cutters appeared to be made of energy and were fired straight ahead instead of acting like boomerangs. It is unknown if the Rolling Cutter would act like this in the game, nor if Cut Man would have a buster, as Tellies also had a different behavior but acted like their Mega Man 2 appearance in gameplay footage.

As Cut Man's weapon, the Rolling Cutter appears in all games he appears, although he doesn't use it in all appearances, like his cameo in Mega Man 7. It is not obtained by the player in those games.

Rolling Cutter is one of Dr. Wily's attacks in Puzzle Fighter, with two cutters appearing off-screen to hit the opponent.

Damage values in units in the original Mega Man.

Mega Man uses the Rolling Cutter in the Mega Man animated series. When obtaining the weapon in the first episode by touching Cut Man's arm, it has a normal design, but in the episode Terror of the Seven Seas it has the shape of Cut Man's head.

What was also noticeable about the cutters when used by Mega Man, was that they seemed to have homing capabilities—this was demonstrated in the first episode, when they chased Cut Man across almost the entire airstrip, only stopping when Cut Man escapes in the Skullker, and even then following him inside.

Besides throwing the cutter in his head, Cut Man is shown using the cutter without removing it from his head, cutting objects in his path while running, and he can rotate the cutter when needed. He is also able to turn either one of his arms into cannons to fire cutters. Cutters launched from his arms fly straight ahead instead of acting like a boomerang. In addtion, he can turn both of his arm into cannons at once, similar to the Double Mega Buster.[2]

Mega Man obtains the Rolling Cutter in issue 2 and uses it against Elec Man in issue 3.

Rolling Cutter is a cutter made of Ceramic Chitin (Ceratanium), giving it high durability and a resistance to rust and varying temperatures. Cut Man can take the Rolling Cutter with his hands and throw it like a boomerang, his hands having anti-slip surfaces so he can catch the cutter as it returns to him. He can also use it directly from his head, turning it if needed. After Cut Man's defeat, Mega Man copies the Rolling Cutter and later uses it to defeat Elec Man, firing it from the Mega Buster than changing his arm to normal to catch the cutter.

In Mega Man Gigamix, Cut Man is attacked by Jupiter and loses both arms, but he is still able to launch Rolling Cutter from his head, losing it after the attack. Later, one of his arms is found by Gravity Man and attached to him by Elec Man. Cut Man then turns his arm into an arm cannon to create a new cutter for his head. It is unknown if Cut Man can fire the cutter from his arm cannon as this is the only time he is seen with one in the manga. When facing the Stardroids again, Cut Man combines with Rush and fires the cutter alongside a Super Rocket Buster, but it has no effect on Mercury. 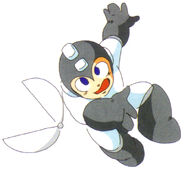 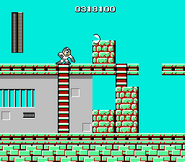 Rolling Cutter in Puzzle Fighter.
Add a photo to this gallery 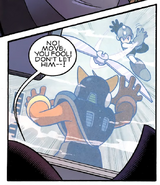 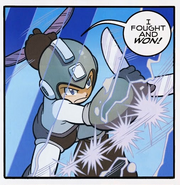 Break Man taking Rolling Cutters from Cut Man and using them against Bomb Man in the Mega Man comic. 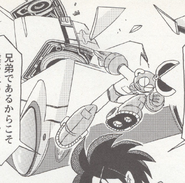 Cut Man using Rolling Cutter without removing it from his head in Mega Man Megamix. 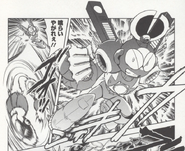 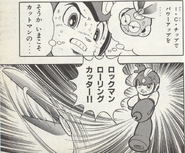 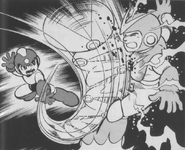 Rolling Cutter in Captain N
Add a photo to this gallery

Retrieved from "https://megaman.fandom.com/wiki/Rolling_Cutter?oldid=341150"
Community content is available under CC-BY-SA unless otherwise noted.