MMKB
Register
Don't have an account?
Sign In
Advertisement
in: Mega Man: Fully Charged characters, Robots made by Dr. Light, Robots,
and 3 more

Rush is a character from Mega Man: Fully Charged. He is the robot dog of the Light family.

At first, Rush resembled a real dog more than his original counterpart, having brown skin/"fur" and mechanical details in metallic red.

After being injured by Lord Obsidian in Lightfall Part II, Rush has been upgraded to be able to transform into a battle mode which closely resembles his game counterpart but with blue highlights and a blue visor.

Rush is normally playful and joyful, but occasionally his mood gets dampened, usually by Aki and Suna's ongoing fight over him.

He is a smart dog capable of understanding his owners to some extent.

Rush can extend his tail, being able to use it as a cable. 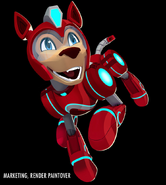 Rush, along with all the other characters, in the opening of Mega Man: Fully Charged. 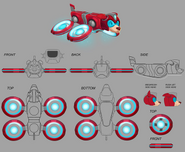