Rush Coil (ラッシュコイル, Rasshu Koiru) is a recurring item in the original Mega Man series. When used, Rush appears and a coil platform emerges from his body, which can be used to propel Mega Man to higher areas by jumping on the coil.

Rush Coil appears as an item in the games listed below. In Mega Man 3 and Mega Man II, the Rush Coil used three units of weapon energy per jump. In later games, it only used two units. In most games Rush is able to stand on spikes, Mega Man 11 being an exception. In Mega Man 7, Rush will retreat if he is hit by enemies.

In the opening scene from Mega Man 8, Mega Man used Rush Coil in the air to avoid an attack from Bass.

In Mega Man 2: The Power Fighters, Rush Coil can be used by Mega Man to jump higher while Rush is present.

In Wily & Right's RockBoard: That's Paradise, Rush Coil is used to send a player to a different panel.

In Castle & Dragon, Rush Coil is a special move from Mega Man. Mega Man calls Rush, jumps on him, and fires a Charge Shot mid-air, hitting a large area.

In Super Smash Bros. for Nintendo 3DS / Wii U and Super Smash Bros. Ultimate, Rush Coil appears as Mega Man's up special move. Like in the original games, when Mega Man jumps over him, he gains a very high altitude upon jumping. However, unlike in the games, he can be used mid-air, so he can be used as a recovery move, and it doesn't leave Mega Man helpless upon using it. Bouncing off him a second time makes Mega Man jump higher. Opponents can also jump over him, even when mid-air. After a while, Rush teleports away, and can be used again. It acts similar to Sonic's Spring (his up Special move).[1] In Super Smash Bros. for Nintendo 3DS and Wii U it can be customized by swapping it out for two variants: Tornado Hold and Beat. However, they must be unlocked before it can be swapped out.

New Rush Coil (ニューラッシュコイル, New Rush Coil) is a modification of the Rush Coil that only appeared in Mega Man 5, being available from the beginning of the game. The coil appears below Rush, and Rush is propelled with Mega Man. Mega Man can leap off Rush to reach his target, allowing even higher jumps. Each jump uses four units of weapon energy.

Rush Coil appeared in the Archie Comics Mega Man comic series, in the Rockman manga series, and in Rockman Remix. 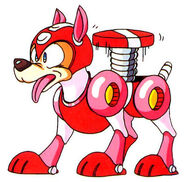 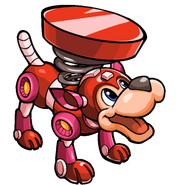 Rush Coil in the Rockman 4 manga. 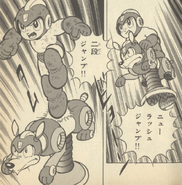