Rush Jet (ラッシュジェット, Rasshu Jetto) is a recurring item in the original Mega Man series. When used, Rush appears and transforms into a flying sled which Mega Man can ride, his rear legs becoming jet thrusters.

In Mega Man 3 and Mega Man II, Rush Jet will stay underneath Mega Man under any circumstances, unless Rush hits a wall. He acts as more of a personal hover device instead of a jet, allowing Mega Man to move in any direction, or stand still entirely, following the player's input. Also, Rush Jet's energy will only deplete if Mega Man is currently standing on him. Because of this, if a player continuously jumps, large pits can be crossed while using little or no energy. Due to its behavior, Rush Jet can be used to safely defeat Wily Machine 3. It can be gotten without beating Needle Man. The way to do it is to defeat Shadow Man, (most likely with a password)  then, in a stage, run through the stage. When you find weapon energy capsules, highlight Shadow Blade, then push right, then equip the invisible Rush. You can use it, but only lasts, like, two seconds. It's more like a glitchy Rush Jet. This same method can be used with Rush Marine, but instead you have to beat Spark Man and highlight his Spark Shock.

In Mega Man 4 and later games, Rush Jet became more like a jet. When Mega Man jumps on him, Rush will only move forward and his energy will be continually drained, and he will continuously move in the same direction, making slight variations in vertical movement at the player's discretion, acting similar to Item-2 from Mega Man 2. This change was made because once Rush Jet was acquired in Mega Man 3, it could be used to bypass situations where Rush Coil or Rush Marine were required and did so more effectively and easily than they could.

In Mega Man 7, Rush will teleport out if he is hit, so extra care is required when using Rush Jet as he may drop Mega Man.

In Mega Man 11, Rush Jet can be summoned/removed from the battlefield at will depending on the button pressed (such as

which is the default button for the PS4 version). However it now shares its weapon energy with Rush Coil, so a good strategy is conserving weapon energy, even if it means sending Rush away from the battlefield.

In Mega Man 8, Rush Jet is used to pass a section from two stages. The first one is in Tengu Man's stage, and the second in Wily Stage 2. During these segments, Rush Jet behaves similarly to how it acted in Mega Man 3, but is constantly moving forward and lasts until the end of the section, making the gameplay of the section akin to a shoot 'em up. These sections also featured giant Party Balls which contain one of four power ups for Mega Man, summoning Beat, Eddie, or Auto to assist him, or equipping a cannon on Rush.

In Mega Man 2: The Power Fighters, while accompanying Mega Man, Rush will turn into Rush Jet and fly to hit the boss when Mega Man uses a Charge Shot or a Mega Upper.

In Mega Man: Upon a Star, Rush is upgraded to be able to carry Mega Man, Proto Man and Beat to space.

In Mega Man Megamix, Rush also contains jets in his tail and front paws. The front paws are only used when extra speed is needed, and they are also used as brakes.

In Mega Man Through the Ages, the Rush Jet briefly appears nearing the end of the retrospective trailer, where he helps Mega Man cross a massive spiked pit. 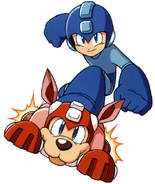 Rush Jet in Mega Man: Upon a Star.

Rush shooting in Mega Man: Upon a Star.

Rush's weapon in Mega Man: Upon a Star.

Rush Jet in the Rockman 4 manga.

Rush Jet in the Rockman 7 manga.

Retrieved from "https://megaman.fandom.com/wiki/Rush_Jet?oldid=298057"
Community content is available under CC-BY-SA unless otherwise noted.