The Rush Roadstar (ラッシュロードスター, Rasshu Rōdosutā) is a car shaped like Rush driven by Mega Man in the Mega Man series.

It is not clear in the games if it is a full transformation of Rush (similar to Rush Drill), if Rush is a part of the car (like Mega Man Gigamix), or is simply modeled after him (like Big Eddie and Eddie), but as one of Mega Man's quotes when selected in the Versus and Time Attack modes from Mega Man: Battle & Chase is "Here we go, Rush!", it is implied that Rush is within the car.

Mega Man uses Rush Roadstar as his vehicle in the Battle & Chase competition. With its default parts, the Rush Roadstar is a balanced machine with a maximum speed of 464 km/h on normal roads, and can be improved with parts from other cars. Its body part has as normal attack a Mega Buster shot straight forward that can damage enemies on the way and slightly interferes with the handling of opponents. Its charge attack is Charge Shot, a bigger shot that causes more damage to enemies and makes opponents spin.

Rush Roadstar, misnamed Rush Roadster in this game, appears as a toy car belonging to one of the twins in Area C, the other twin having Proto Man's Red Striker.

Rush Roadstar is one of the vehicles used by the player in the race minigame from the Highway.

Appearances in other media

Auto transformed Rush into Rush Roadstar to participate in the Battle & Chase, equipping him with several parts, including the jet from Item-2. Rush can't move in this form, being stuck inside the car. Being in a hurry and upset for Auto taking all his transports, Mega Man takes the Rush Roadstar to go to the World Bridge. When the car is damaged during an attack from Wily's robots, Rush leaves the burning remains of the Rush Roadstar in the Rush Cycle form, allowing Mega Man to escape.

Knowing that Dr. Wily might attempt to get the prize from the Battle & Chase competition and use it for evil, Dr. Light modified Rush into the Rush Roadstar so Mega Man could participate in the race and win the prize. Rush is severely damaged in early races and Mega Man needed to carry him to the finish line. As Proto Man was out of the race, he gave his damaged car to Mega Man and it, alongside the parts brought by Auto, are used to repair Rush, also replacing his Twin Engine by Proto Man's Last Blow Engine. While racing in the desert, Guts Man gives the tires from his car to Mega Man as thanks for saving him, allowing Rush to move faster in the current terrain. In the final race, Rush is equipped with the Last Blow Engine, Ice Man's Blizzard Wing, and Shadow Man's Fuuma Tire.

While Rush appears to be unable to move on his own as Rush Roadstar, he is seen moving by himself once when Mega Man gives him a rope to pull Guts Man out of a pit. He also often moves his head, being able to look around, talk, and bite Quick Man when annoyed by him. 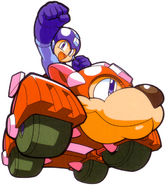 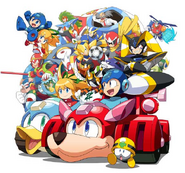 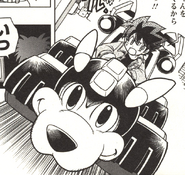 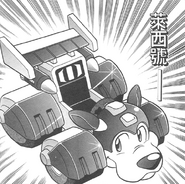 Rush Roadstar in the Rockman Battle & Chase manhua.
Add a photo to this gallery

Retrieved from "https://megaman.fandom.com/wiki/Rush_Roadstar?oldid=226786"
Community content is available under CC-BY-SA unless otherwise noted.