"This is the Search Rush. It enables Rush to scan for secret passages."
―Auto, Mega Man 7

Rush Search (ラッシュサーチ, Rush Search), also called Search Rush (サーチラッシュ, Search Rush), is a function of Rush in the Mega Man series. When used, Rush teleports in front of Mega Man's location and starts digging to search for items. If Rush is hit by an enemy, he will be knocked back and teleport away, cancelling his action. When called in front of a wall or pit, Rush will be unable to dig and leaves, wasting energy. Besides items, Rush may find garbage such as apple cores and old boots, which are useless and disappear after a few seconds.

Rush Search is obtained by finding it in Freeze Man's stage or by purchasing it in Big Eddie for 120 Bolts after finding Auto's Hyperbolt.

Besides finding items, Rush will bark when called near a secret area, such as the areas where Proto Man and Beat are hidden. He also barks when he finds a hidden item, like the Exit and Energy Balancer. When called in an area where he can't dig, such as in front of a wall or pit, he will fall asleep and take a nap before leaving.

"Rush will dig out a hidden item for you. Believe me, he is a good Digger!"
―Auto, Mega Man & Bass

Rush Search is obtained by purchasing it in Auto's shop with 100 Screws. It becomes available in the shop for Mega Man after the defeat of three Robot Masters. Its function is similar to Mega Man 7, with some changes: Rush no longer barks near secret areas, being used only for digging items, and he now digs faster. However, Rush Search now uses more energy, reducing the number of times it can be used. When Rush appears, he is facing Mega Man instead of the opposite direction, reducing the chances of him appearing in an area he can't dig. If he is summoned on an area he can't dig, Rush will either attempt to dig (without success), bark (absent in the Game Boy Advance version), or take a nap before leaving. Rush can dig in front or a wall, but the item will not appear due to the wall being on the way.

Several of the CDs from the Mega Man & Bass database can only be recovered using Rush Search, and the CD Finder upgrade helps locate them by temporarily showing where they are buried.

Rush's Excavate (挖掘, Excavate) ability in Rockman Strategy has the same function of Rush Search, having a chance of finding an item.

Items that can be found with Rush Search.

Items that are found only in specific locations.

Besides items, sometimes Rush Search will also show one of four possible animations: Rush is pinched by a crab, pulled by something underground, causes an explosion on his face, or releases underground water and gets wet.

See Mega Man & Bass CD Database for more details on where to find the CDs.

While not mentioned as Rush Search, Rush used his enhanced olfaction to help Mega Man in other media.

Rush used a searchlight on his nose to light the path for Mega Man in the episode The Big Shake.

In the crossover Worlds Collide, Rush used his olfaction to guide Mega Man, Proto Man, Sonic and Tails in the Skull Egg Zone.

Rush also used a searchlight on his nose to provide light in the ruins of the Temple of the Moon.

Using his olfaction, Rush discovered that Dr. Wily stole the time machine from the Time-Space Research Laboratory and was able to track him to his Wily Castle.

In one of Ryūzō Sotoma's comic strips, Dr. Wily made Rush scared of using Search Rush by reading Hanasaka Jiisan to him. 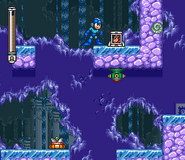 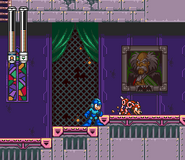 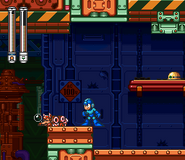 Rush sleeping in front of a pit in Mega Man 7 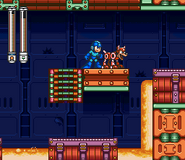 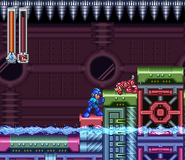 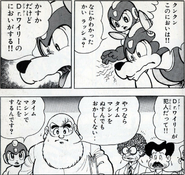 Rush using his nose in the Rockman World 2 manga 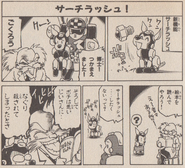 Retrieved from "https://megaman.fandom.com/wiki/Rush_Search?oldid=263122"
Community content is available under CC-BY-SA unless otherwise noted.