The Safari Park Stage is an artificial park located in the eastern mountains of Dopple Town. The stage begins in an open area with Tomborts, which can be used as platforms to reach the top of the area faster. There is then a tunnel full of Drill Wayings, followed by a downward ladder that leads to the sub-boss arena of Worm Seeker-R. Next is another forest section before the sub-boss room where Bit or Byte appear, and after that is a section with Atareeters creating spikes before Neon Tiger's boss room.

The Jungle Stage on Laguz Island is very different from the safari park in Mega Man X3. It is part of X Mission. Visually, it resembles more of a thick forest than a park. The route travels along the treetops, moving platforms, and two Ride Armor sections, none of which were originally present. Overall, it takes heavy inspiration from Sting Chameleon's Forest Stage. 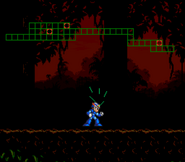 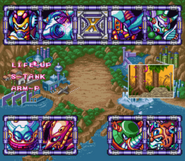