Sagat (サガット, Sagatto, Thai: สกัด) is a character in the Street Fighter series. First appearing in the original Street Fighter as the final boss, he is known as the "Emperor of Muay Thai." The scar upon his chest serves as a reminder of his defeat against Ryu and his Shoryuken. He is also a former member of the criminal organization Shadaloo, being M. Bison's personal bodyguard as well as one of the feared "Four Heavenly Kings".

Sagat appears as a secret boss in the Version 2 of Street Fighter X Mega Man. His weakness is the Hadoken.

Sagat attack pattern mainly consists on using Tiger Shots that will throw at different speeds and heights, while they can be destroyed with normal shots. They can also be deflected with the Aegis Reflector weapon, although, the reflected projectiles do little to no damage to Sagat, but it can help Mega Man set up a charged shot with the Hadoken weapon. His Tiger Cannon, while powerful, can be avoided by merely jumping at the right time or deflected. His Tiger Knee will go over Mega Man's head, so it's not a really treatening attack since most of his moveset is based around throwing fireballs at Mega Man. The Tiger Uppercut can also be avoided by just walking under Sagat, sometimes he does this move consecutive times. The Tiger Genocide is when Sagat uses a Tiger Knee and a Tiger Uppercut. When his Super Combo Gauge is charged, he will do the Tiger Destruction where he starts with a Tiger Knee and two uppercuts, one normal, and one that will make him go high up in the air. Again, the only strategy is waiting for the first uppercut to end, and walk under Sagat when he is about to make his second uppercut and then strike.

With the Hadoken, a good strategy is to have a charged shot ready when entering the boss fight screen, so Mega Man can do a chunk of damage at the start. Then, when Sagat starts shooting, simply jump over his shots and attack when the opportunity presents itself. Once he is doing his Tiger Destruction Super Combo, a normal Hadoken shot can be landed on the first uppercut or before, and then a charged Hadoken shot after his second uppercut.

Since Version 2 of Street Fighter X Mega Man, Sagat was made into a secret boss that can only be accessed when a certain requierement is met. 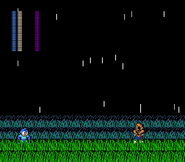 Sagat shows up before fighting M. Bison.
Add a photo to this gallery

Retrieved from "https://megaman.fandom.com/wiki/Sagat?oldid=245056"
Community content is available under CC-BY-SA unless otherwise noted.