Sal, known as Saroma (サロマ, Saroma) in Japan, is a character in the MegaMan NT Warrior anime series. The owner of a flower shop in DenTech City that Lan Hikari and his friends often visited, she is secretly a Net Agent alongside Miyu and Maysa under the disguise of Black Rose (黒バラ仮面, Kuro Bara Kamen, "Black Rose Mask" in Japan). She is the NetOp of WoodMan.EXE.

She is a prominent character throughout first season, helping stop the World Three and Grave and participating in the N1 Grand Prix, but begins to travel the world with Maysa and Miyu stopping crime worldwide afterward, only appearing twice in Axess before disappearing altogether.

Sal is quite different in the anime compared to her video game counterpart. Whereas in the Mega Man Battle Network series Sal only has a minimal role besides taking part on the Blue Moon Tournament, in the anime Sal has a prominent role as one of the main characters in the first season, mentoring Lan and his friends as a Net Agent as they battle the World Three. Rather than running a boxed lunch stand like she does in the video games, Sal was her own flower shop. Though Sal and Speedy Dave have no relation in the video games, even appearing in different games than each other, she and Dave are childhood friends in the anime.

In a reference to the original Mega Man Battle Network, Sal is partnered with Miyu and Maysa as Net Agents. In the game, the three of them are optional bosses with no story relevance, a stark contrast to the anime, where they guide Lan to becoming a enter Netbattler.

Sal is a gentle and kind young woman who loves nature, and has great knowledge of it. She is wise beyond her years, often giving Lan and friends advice on how to solve problems. Despite seeming like a simple flower shop owner, Sal is secretly a Net Agent with a strong sense of justice and a skilled net battler working to stop crime while under the disguise of Black Rose. At rare times she may slack off on her job, such as when she was sent to Jyawaii to watch out for crime, but instead sunbathed on a boat with Miyu. She once misused her powers as a Net Agent to let her childhood friend Dave get away from the Net Police when he put on an act and threatened to blow up Okuden Valley’s dam, though this may have been to protect him from Grave, as he had hired to do so. She is a fan of Aki and once dressed as her for a lookalike contest.

Soft spoken and shy, she gets flustered in many situations, such as when Maylu and Yai ask if Dave is her childhood love, when she was seen dressing up as Aki, and when she was asked (forced) to be the announcer of a NetBattle tournament competing for Ms Mari’s love, though in that case once the competition started she quickly became energetic and loud.

She debuts in episode 2.

She appears in episode 7.

She appears in episode 9.

She appears in episode 10.

She appears in episode 11.

She appears in episode 12.

She appears in episode 13.

She appears in episode 14.

She appears in episode 32.

She appears in episode 39. This is her last episode.

Sal's flower shop in the anime.

Inside Sal's flower shop in the anime. 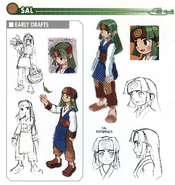 Toys of Black Rose, Mysteriyu, and Commander Beef in Axess.