Travels along the floor while splitting apart and damages grounded enemies

Can be tilted upwards to hit airborne enemies

"Unleash crackling bolts of electricity that speed along the ground. Try it with the Power Gear active to up the voltage, making shots pierce multiple enemies!"
―Weapon description, Mega Man 11

Scramble Thunder (スクランブルサンダー, Sukuranburu Sandā) is Fuse Man's Special Weapon in Mega Man 11. After obtaining it, Mega Man is able to shoot a sphere of electricity that can travel along platforms after touching a surface. Not only can it be fired straight forward, but it can also be aimed up or down. It is extremely similar to the Plug Ball, both in nature and in element. Unlike Plug Ball, however, Scramble Thunder's projectiles also explode when they hit an enemy, releasing a short-lived electrical field that damages nearby enemies.

If Mega Man uses Scramble Thunder when the Power Gear is in effect, he will fire a larger sphere that deals more damage and can pass through enemies.

Like all of the special weapons in the game, Scramble Thunder gives Mega Man new Head Gear and Arm Gear that alters his physical appearance when equipped, rather than just being a color swap. In this case, the Head Gear is a helmet that looks almost exactly like Fuse Man's, and the Arm Gear is a dual-pronged taser.

This weapon is the weakness of Tundra Man. 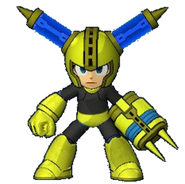 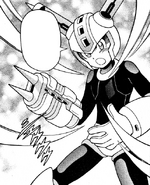