Scrap Robo (スクラップロボ, Sukurappu Robo) is an enemy in Mega Man X and Mega Man Xtreme 2. It is a broken robot that appears in the conveyor belts from Flame Mammoth's stage. It attempts to crawl with its one arm and sometimes shoots at X from its eye before falling to its doom on the molten metal. As the molten metal becomes solid after Chill Penguin's defeat, they will shatter when they fall on the ground.

One Scrap Robo appeared in the Rockman X manga. 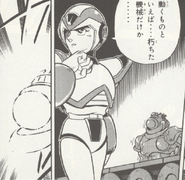 Rockman X manga
Add a photo to this gallery

Retrieved from "https://megaman.fandom.com/wiki/Scrap_Robo?oldid=307079"
Community content is available under CC-BY-SA unless otherwise noted.