Screw Driver (スクリュードライバー, Sukuryū Doraibā), known as Screw Bomber in some English sources, is an enemy from Mega Man. It was originally a fire extinguisher. It stays in the floors and ceilings, and, when Mega Man gets close to it, spins and shoots in five different directions twice. It does this once in Mega Man: Dr. Wily's Revenge.

In Dr. Wily's Revenge they appear in:

They appear in Mega Water S's Stage and the 1st Wily Stage in Mega Man: The Wily Wars.

Originally a fire-extinguishing robot. It fires a lot of shots, so it's best to destroy it before it gets the chance.

Amount of shots/hits from Special Weapons it takes to destroy a Screw Driver.

Driver Cannon (ドライバーキャノン, Doraibā Kyanon) is an enemy from Mega Man 7. It alternates between two shots to the sides, and two shots in a V-shape. It appears in Freeze Man's stage, Burst Man's stage, Junk Man's stage, and in the second section of Wily Castle. 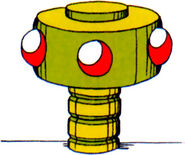 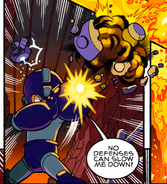