Sean Obihiro, known as Shun Obihiro (帯広 シュン, Obihiro Shun) in Japan, is an orphan from the Mega Man Battle Network series who is the leader of the criminal organization Gospel. Disguised, he is Lord Gospel, known as Ringleader of Gospel (ゴスペル首領/｢ゴスペル｣しゅりょう[8], Gosuperu Shuryou) in Japan.

Sean Obihiro lost his parents to a plane crash caused by net-terrorism. Afterwards, he was shipped to his closest relatives, who treated him cruelly. His experiences as an orphan by society at large were also horrible, having been ostracized. It was in large part because of this that he withdrew from and began harboring an intense anger and fear of society, not even capable of believing in the concept of friendship and thus only able to trust computers and machines. He was also lonely by consequence, but his traumatic past prevented himself from ever opening up to people. He then decided to make friends on the net, which ultimately resulted in the creation of Gospel.

Five years later, Sean (now 10 years old[9]), the leader of the Gospel, disguised himself with a protective suit, which also gave him the illusion of being far older than he actually was, and also gave commands to his peons. In large part because of his untrusting nature, he also instituted a one-chance policy regarding his minions, meaning his minions, should they fail him, either end up killed or otherwise left to their fate if arrested, or in the case of mercenaries, simply terminating their employment. He's first seen in the airplane Gauss Magnus hijacked, and later in Gospel's headquarters.

Sean later unwittingly unveiled himself after the defeat of Bass resulted in his leader disguise collapsing. Unwilling to surrender, due to anger and fear that the world hated him due to his past experiences, he attempted to jack up the servers beyond capacity, putting himself and Lan at risk of the radiation. At 200%, however, Bass and the servers got out of his control after it transformed into the Multibug Organism Gospel. After the defeat of the Multibug Organism also called Gospel, the final boss, it is revealed that he created Gospel after his family died in a plane crash and he became an orphan ostracized by society. By using the disguise of the Internet, he was able to recruit his members while appearing as a powerful man rather than a young boy. When he explains to Lan about his family, he is seen holding a photobook after he lost his Gospel leader disguise. He then considered suicide, largely because he still believed that the world hated him, although Lan vowed to be his first friend... after he has atoned for himself. After he underwent a trial (with him being given a slight bit of mercy in terms of punishment due to his motives and backstory), Mr. Hikari started to suspect that Sean may not have been entirely acting on his own accord, and that someone else may have been manipulating him (apparently suspecting that the man manipulating him was none other than Lord Wily).

In this game, Sean was visiting Mr. Hikari inside the Beach Hospital, telling his story to him. In this conversation, Sean, confirming Hikari's earlier suspicions, reveals that someone else was actually manipulating him in carrying out Gospel's plans.

Sean later on comforts Lan along with Mamoru, Mayl, Yai, Chaud and Dex outside the hospital after MegaMan supposedly dies fighting Alpha back at the WWW base.

Sean appears as one of the contestants, where he uses FreezeMan as his NetNavi.

Unlike in the video games, Sean is not Kid Grave in the anime. Instead the disguise is actually a robot who believes he a real human created by Mr. Wily and manipulated to create the Grave Crime Syndicate. Upon discovering that he is not a real person at the climax of the Second Area of the first season, Kid Grave is deactivated by Wily and his body becomes a lifeless shell, which is then taken over by Bass.

Sean appears in Volume 4 under the fake name of Kei Yūki until Volume 6. He is said to be a child prodigy and is helping the NetPolice in many investigations. He is bright and cheeky and has often said some scathing comments in a blunt manner. Because of this, he gets on the bad side of Lan, MegaMan, Chaud and ProtoMan and they all have at least once more or less beaten him up. 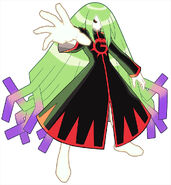