Seaside Town is a location from Mega Man Battle Network 6. The town's primary objective is to provide Cyber City clean water, which is achieved through a very effective water filtering process.

Besides the water filter system, the Aquarium is the other major aspect of Seaside Town. In regards to appearance and size, the Aquarium building resembles a whale, with the mouth presenting the entrance. To enjoy the Aquarium, adults are required to pay a fee of 1000 Zennys, whilst the cost for kids is 500 Zennys. Although Lan and Mick fit in the kids category, they were granted continual free access after their efforts during the Blackbeard incident.

The Aquarium maintains thirteen species: turtles, tropical fish, sunfish, piranhas, jellyfish, Nautilus, King crabs, clione ("sea angel"), dolphins, sharks, penguins, Elephant seals and alligators. Each animal enclosure features a recorded voice guide, which may be activated to convey information on the creature in view. In addition, the Aquarium works to breed some of their larger animals to help preserve the species.

The entrance to the Aquarium. (MMBN6 Gregar version)

The entrance to the Aquarium. (Falzar version)

The foyer, featuring a reception desk and information board.

A partial view of the Aquarium's first room. (Falzar version) 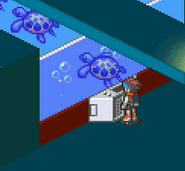 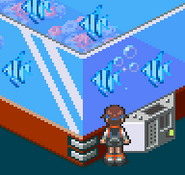 The tropical fish in this tank are called "angelfish". 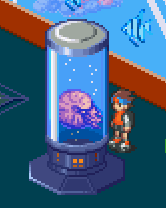 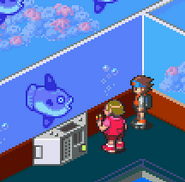 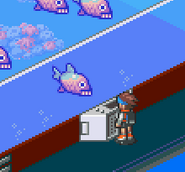 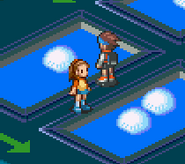 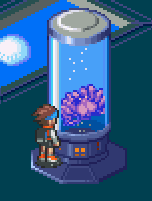 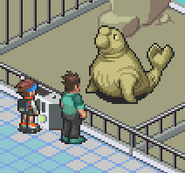 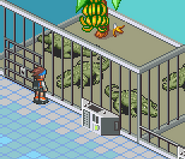 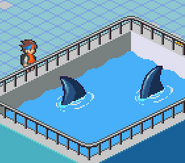 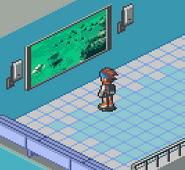 A short movie called "Mysteries of the Deep" is playing. 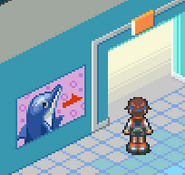 "This way to the show stage!" (Gregar version)

"This way to the show stage!" (Falzar version)

There are a total of 30 popcorn flavors available. 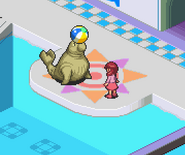 Lan is chosen to have a go at riding Finny.
Add a photo to this gallery

Right at the entrance of Seaside Town and inside the aquarium, are vending machines. Due to the fact Seaside Town studies water, these particular dispensers sell all sorts of drinks, but more kinds of water refreshments than anything else. King Of Water SP and New Awesome Water EX are examples of water beverages available for purchase. Also, the center of town features two cylindrical vending machines, that carry a delicious water refreshment full of minerals, called "Essence of Ocean". Overall, the water sold in Seaside Town is famous for its quality and health benefits.

The vending machine found at the entrance of Seaside Town. (MMBN6 Gregar version) 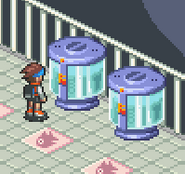 Mr. Press hosting a class for NetBattlers in the second room of the Aquarium. (Falzar version)
Add a photo to this gallery

Products sold at this outlet have a unique feel and are made with care. The stuffed toys come in forms of animals from the sea, with the selection consisting of whales, penguins, seals and additional creatures. 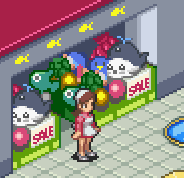 (Falzar version)
Add a photo to this gallery

Alongside the Stuffed Toy Shop, is the Fish Stick Shop, which usually has a pleasant smell coming from the fryer. The items for consumption utilize fresh fish, which may contribute to their reputation of being tasty. 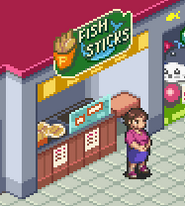 (Falzar version)
Add a photo to this gallery

One morning, a penguin is found following Mick into the classroom. After school, Lan uses the BBS information board in Seaside Area and discovers a post from the Director of the Aquarium, stating a penguin recently escaped and to contact the Aquarium if it is spotted. Soon after, Lan and Mick arrive to return the penguin escapee, which they learn is named Plata. The boys also come to know the reason behind Plata's escape, which was due to Blackbeard's actions.

On the Request BBS at AsterLand, a job titled "Penguins Ran Away" becomes available. Once accepted, Lan is required to meet up with the requestor, who is waiting by the Piranha Tank at the Seaside Aquarium. The requestor informs Lan that five penguins have escaped and it's possible they've even taken the LevBus to other locations. Ultimately, two penguins are found in Seaside Town and three made their way to Central Town.

Lan eventually finds Blackbeard in the Control Room, who reveals to Lan that he believes the panic and danger he has caused, was the kind of excitement and entertainment that the Aquarium needed. MegaMan is soon sent into the Aquarium Computer, where he manages to return confused Fish Programs to their rightful tanks, defeat Blackbeard's NetNavi DiveMan and activate the Feeding Time chime that directs the loose animals back into their Aquarium enclosures.

Soon after MegaMan jacks-out, Lan realizes Blackbeard is no longer in the room, but immediately hears Mick's distressed voice. Lan races through the Aquarium and finds Blackbeard with a tight grip on Mick, who apologizes for letting his guard down. Before long, Blackbeard admits that he was planning to take over Seaside Towns waterworks and stop all the water in Cyber City. In the end, Plata and Fanny come to the rescue and knock out Blackbeard, who is quickly turned into the NetPolice.

Blackbeard is determined to commence his attack.

Sharks have left their tank and entered the towns waterways.

An alligator loose in the Aquarium.

A turtle and a penguin are roaming free. 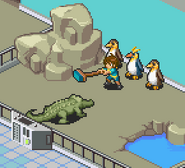 Mick wards off an alligator to protect Plata and the other penguins.

The Aquarium director is cornered by an alligator. 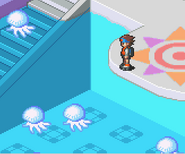 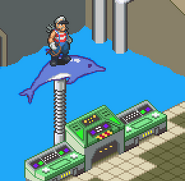 Blackbeard stands above the Aquarium Computer in the Control Room. 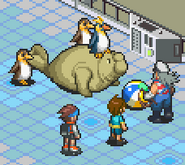 Plata and Fanny charge towards Blackbeard.

Lan and Mick receive praise.
Add a photo to this gallery

When Lan reunites with his friends of ACDC Town, MegaMan and his Navi comrades hang out on Yai's net space of ACDC Area. Suddenly, BlastMan and DiveMan appear and take GutsMan, Roll and Glyde as hostages, telling MegaMan to come to Undernet 2 if he wants to get his friends back. Once MegaMan reaches his allies and their captors, he is required to battle BlastMan and DiveMan one after the other. The battle is eventually over and MegaMan is left weak. Almost immediately, CircusMan shows up and captures MegaMan before disappearing.

Upon returning to Central Town, Lan receives a call from Mick and is informed that there's a Navi causing chaos in the real world, which indicates the use of a CopyBot. Mick also mentions that the wild Navi on TV looks a bit like MegaMan and that he's currently terrorizing Seaside Town. Lan soon arrives and finds MegaMan dominated by the power of the Cyber Beast, thanks to Yuika, Vic, Prosecutor Ito, their "Benefactor" and the "Cybeast Worshippers". Ultimately, MegaMan gains consciousness with the help of Iris, but flees from the CopyBot (to the Underground). Consequently, Seaside Town is safe again. 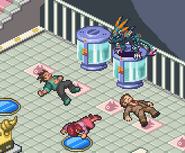 MegaMan leaves the CopyBot.
Add a photo to this gallery

MegaMan can Jack-in to the exposed fryer at the Fish Stick Shop, to access the store's computer. Once inside, MegaMan can even talk to a Mr. Prog to try out a fish stick. Piranhas are the only viruses MegaMan may encounter whilst in the area.

There's a door to the left of the Fish Stick Shop, it leads to a Control Room that contains the computer which controls water pipes. It's called the Pipe Computer and it connects to Central Area 2, followed by Seaside Area 3. MegaMan will only encounter Mettaur viruses whilst in the Pipe Computer.

Out of the two cylindrical water dispensers that sell "Essence of Ocean", the machine on the right gives access to the Water Machine Computer. Mettaurs are the only viruses present in that area.

The Aquarium Computer is found past the Aquarium reception desk and past the show stage, where it resides in the Control Room. In the first Aquarium Computer area, it's possible to meet the following viruses: Gunner, Piranha, Puffy and Quaker. Furthermore, in the second and third area, it's possible to encounter the following viruses: Piranha, Puffy, Quaker and StarFish.

The second room of the Aquarium features a monitor that can be accessed to arrive at the Aquarium home page. Piranha and Puffy viruses may be encountered in the area.

In the Aquarium's Auditorium there is a Popcorn shop and therefore a popcorn machine, that's possible to Jack-in to. Only the BombCorn virus may be met in the Popcorn Shop Computer. 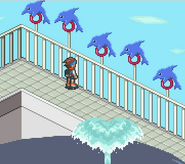 Dolphin signs arranged to look as if they were playing in a group. (Gregar version)

A fountain with a mermaid statue. (Gregar version)

The water pipe Control Room.
Add a photo to this gallery 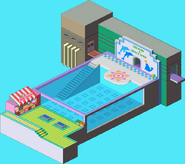 Pumping Room
Add a photo to this gallery

Retrieved from "https://megaman.fandom.com/wiki/Seaside_Town?oldid=226961"
Community content is available under CC-BY-SA unless otherwise noted.