Seiei Enbu (星影円舞, Sei'ei Enbu, "Starlight Waltz") is a special weapon from Street Fighter X Mega Man. When used, Mega Man will move faster, jump higher and will generate afterimages after he moves. Also, when Mega Man uses his buster, the afterimage will shoot as well. However, once activated, Mega Man will not be able to switch weapons or stop the weapon's energy consumption, draining 1 point of energy per 2 seconds. However, when charging the buster or jumping, the energy consumption is paused. This weapon is applied to Mega Man's default Mega Buster weapon, so it's technically another special weapon that can be selected and used. The Seiei Enbu can be activated by pressing the left Weapon Change button and the Fire button at the same time.

The only way to obtain this weapon is by the use of a secret code: On the Start Screen, hold down the Fire and Jump Buttons for 6 seconds until a noise can be heard, indicating the activation of the code. This code also unlocks the original Hadoken.

When using the original Hadoken while having the Seiei Enbu activated, Mega Man will shoot two Hadokens at different speeds. 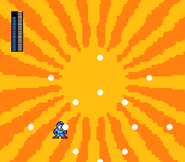 When defeating a boss while the Seiei Enbu weapon is active, a Super Combo Finish effect will appear, this also appears when a boss beats Mega Man with a Super Combo.
Add a photo to this gallery

Retrieved from "https://megaman.fandom.com/wiki/Seiei_Enbu?oldid=254080"
Community content is available under CC-BY-SA unless otherwise noted.