Sera (セラ, Sera), is a character from the Mega Man Legends series and the main antagonist of Mega Man Legends 2. She is the Mother Unit who rules over the systems on Elysium. Sera is serious and machine-like in personality, and does not understand why the Master trusted Mega Man so much, following the System strictly. She is accompanied by her Servitor Unit, Geetz.

Although Sera is an Ancient, she is physically similar to Yuna; both resemble little girls with tanned skin, green hair and red eyes. However, Sera's hair is short and tidy, with longer curved bangs covering her cheeks; her outfit is similar to Yuna, although the color is white instead of black, and it also includes a curious symbol consisting of two red ovals overlapping into a "T" shape. She has the same marks seen on Yuna's shoulders, as well as her own pair of bracelets.

Sera at first has a very stoic personality, her only interest being to serve the system dutifully. However, she begins to show more emotion toward the end of Legends 2, including frustration and even jealousy. Although she considers such emotions "troublesome" at first, she shows signs of changing in the ending of the Legends 2 when she smiles at Yuna.

Like Yuna, Sera also had a Servitor Unit: Geetz, who served as Sera's bodyguard before falling in battle against Volnutt.

"Do not forget, the Master is the only true human remaining. The System exists only to protect and serve the Master. We exist for this and only this purpose."
―Sera, Mega Man Legends 2

Sera was created as the Mother Unit in charge of the Elysium system. Designated "Mother Two", she devoted herself solely to serving the system and the Master, the last true human. In the event of the Master's death, Sera also had the mission of activating the Carbon Reinitialization Program in the Library and replace all Carbon life with clones of the humans who created the system. This would require her to obtain the four keys to the Library from Yuna, the Mother Unit of Terra.

Although she repeatedly warned MegaMan Trigger to ignore the Master's "illogical" words and focus only on serving him and the system, this did not stop Trigger from bonding with the Master and taking him to Terra on request. However, the Master could not survive outside of Elysium and, following his death, Trigger was labeled an aberrant. Trigger fought against Sera, Yuna and others in order to destroy the System and fulfill the Master's dying wish. Frustrated with Yuna's decision to take a neutral stance in the battle, Sera traveled to Terra herself to took matters on her own hands and left Elysium to eliminate Trigger herself. However, she could not bring her full power from Elysium, and Trigger fought her to a standstill. They both expended all of their energy in the battle and Mega Man's original body was almost totally destroyed. After the battle, Yuna took the opportunity to seal both inside stasis fields, with Sera being imprisoned with Geetz on Forbidden Island while Mega Man was "reset" and was sealed with Data on Nino Island.

When Mega Man Volnutt went to the Forbidden Island to rescue the Sulphur-Bottom, he accidentally freed Sera and Geetz. Sera and Geetz were taken to the Sulphur-Bottom, where Geetz tells Verner Von Bluecher that they need four keys to unlock the Mother Lode, which will allow them to have access to ancient technology and produce any amount of Refractors. Knowing that Yuna, who had grown fond of the Carbons, would not yield the keys to the Library, she decides to ignore Volnutt (who has no memory of the past) and focus on retrieving the keys. As per Bluecher's request, Mega Man searches for the keys.

After Mega Man obtained the last key, Sera and Geetz attack the Sulphur-Bottom to steal the keys, which are needed to open the Library in Elysium and execute the Carbon Reinitialization Program. Sera heads to Elysium while Geetz tries to take the Master's Genetic Sample from Mega Man, damaging him in battle. Yuna and her Servitor Unit Gatz attempt to stop the two, but Sera no longer recognizes Yuna's authority due to the fact that she is no longer in her original body. Although Geetz is eventually defeated by Volnutt, Sera succeeds in returning to Elysium with the keys. After being repaired, Mega Man goes to Elysium to stop Sera. In the Library on the Mother Zone, Sera says she could already have started the Carbon Reinitialization Program, but didn't because it would be beyond the System's limits. She goes on to say that she doesn't understand why the Master attempted to destroy the System, and is jealous of Mega Man since he was closest to the Master and able to understand his thoughts in a way she wasn't able to. She held off on using the program so that she could fight and defeat Mega Man, hoping that it would purge herself from her "troublesome emotions". As MegaMan holds his own, Sera is suddenly affected by remote interference from Gatz by invading her internal systems; however, the Mother Two resists the sabotage attempt and unleashes her full power against MegaMan, somehow killing Gatz in the process.

After Mega Man defeats her and she starts to faint, Sera says the more she obeyed the System and tried to serve the Master, the sadder he seemed when he looked at her, and now, thanks to Mega Man, the Master would probably also smile to her as he did to him, as she finally understands what they wanted, at least a little. Yuna (in Matilda's body) appears and asks Sera to transfer her primary program over to Yuna's original body before her shell stopped working, saying Gatz had died because of her "gamble", and if she also dies, there would be no one to keep her company. Now that Elysium is no longer functioning, the Old System the Master's people shut down has started to reactivate, and being Sera's responsibility to monitor it, if she died and it took over Terra, the Master's sacrifice would be for nothing. Yuna convinces her to save herself in her original body, with Yuna commenting she doesn't remember the last time Sera smiled. Sera, Yuna and Mega Man need to return to Earth, but the game ends with them trapped in Elysium, waiting for Roll and Tron, which are trying to send a ship.

Mega Man and Sera in her first form 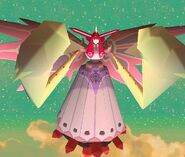 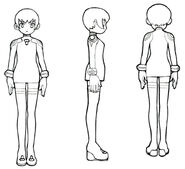 Front, side and back view of Sera 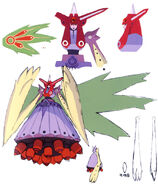 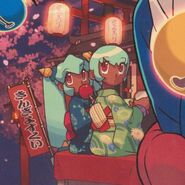 Artwork of Sera and Yuna
Add a photo to this gallery

Retrieved from "https://megaman.fandom.com/wiki/Sera?oldid=219059"
Community content is available under CC-BY-SA unless otherwise noted.