Serenade.EXE (セレナード, Serenādo), also known as "S" and "UnderKing", is a NetNavi from Mega Man Battle Network 3, and the ruler of the Undernet. Serenade’s operator is Mamoru.

When Lan Hikari is asked to obtain the Forbidden Program called "GigaFreeze", which is able to freeze Alpha in case it awakens, MegaMan travels to the Undernet and has to defeat several ranked Navis to reach "S", the Rank 1 Navi that protects the program. After defeating Rank 2, MistMan (White version) or BowlMan (Blue version), he discovers the Navi is called Serenade and is located in the server of the Undernet. MegaMan finds the server in the Ura Inn, where Serenade's voice can be heard and says that if he wants the Forbidden Program, he must be a "Chosen One" to hold it, or the program would freeze him forever. MegaMan is able to take it and leaves, and Serenade is surprised to see that another Navi is able to hold it. Later, MegaMan tries to use the program against Bass while he was taking Alpha after DrillMan's defeat, but it sees him as the other "Chosen One" mentioned by Serenade and Bass is able to stop the program.

After completing the game and completing other quests (like defeating Beta Navis and collecting all normal Battle Chips), the player can enter the Secret Area deep within the Undernet server, where they can fight against DarkMan and JapanMan before meeting Serenade. Serenade recognizes MegaMan's power for being able to defeat JapanMan and DarkMan, and says the source of his power is mercy, and he wins because he loves and respect his enemies. After defeat, Serenade reveals they fought against Bass in the past, winning after a battle that lasted days. MegaMan receives Rank 1 and a side-quest will be available after logging out and then returning to the Secret Area, a time attack against several Alpha NetNavis with an Extra Folder. The player can obtain the Battle Chip Serenade S (White version) or DarkAura A (Blue version) if a new record is set for all Navis.

Serenade gives a fragment of the Giga Freeze program to MegaMan in the Undernet.

Years before the start of the series, Serenade appears before Bass after seeing his cruel way of fighting and questions his presence. Bass replies by attacking them with intent to defeat and absorb their power. However, Serenade easily dodged each of Bass' attack and reflected his attack back, injuring Bass. Serenade reveals that they didn't come to fight, but they came to deliver a message from Dr. Cossack to Bass, surprising the latter. Serenade shows Bass the data that will allow him to jack out straight to Dr. Cossack's PET and tells him to restore the bond he had once lost. Bass crawled until he reached Serenade's hand. To Serenade's shock, Bass decides that he doesn't need bonds with anyone anymore and only need his hatred to become stronger. Grabbing Serenade's hand to prevent them from dodging, Bass uses Earthbreaker at them. However, Serenade survives the attack while Bass fell with heavy injuries, but not before warning Serenade that he will defeat them one day as Serenade looks on.

Serenade approached ProtoMan and Chaud when they went to Undernet to become stronger. Serenade questions ProtoMan's reason to fight and whether or not he has the resolve to accept no matter how hard his destiny will be. When ProtoMan answers that he won't run away, Serenade granted him Muramasa Sword.

They then appear before MegaMan and Lan, preventing them from chasing after ProtoMan and Chaud by creating a barrier, telling them that they are too weak. Realizing that the darkness power cannot enter Serenade's barrier, MegaMan and Lan uses Hub Style to forcefully enter the barrier. MegaMan demands for Serenade to back off, but Serenade simply tells him he can try if he can. MegaMan attacks them, but Serenade easily reflects his attack back to him, heavily injuring him. Serenade then reveals that while Hub Style might be able to defeat Bass before, in their case, it would be useless since they, too, had also defeated him, making them the true strongest Navi in Undernet.

They reveals that they cannot materialize completely to fight the darkness like other Navis because they are too strong and can only send a small part of his power to the real world. Angered that Serenade has no intention to fight, MegaMan once again attacked them. This time, Serenade turns their back on the attack when they noticed something behind them. But this didn't leave them defenseless. Serenade raises their hand towards MegaMan and attacks back, destroying the barrier and defeat MegaMan. It turns out that their sudden offensive was because they were trying to protect a butterfly that trapped within the barrier and let it free. They decides that they will observe MegaMan to see if he can acquire power to match his potential. It was also presumed that Serenade left behind Double Soul program to MegaMan shortly before they left.

They then contacted Mr. Famous, informing him that they have met both Lan and MegaMan, and ProtoMan and Chaud, whom Mr. Famous has chosen. Mr. Famous then asks do they have what it takes for the challenge, which Serenade replies that they might have a chance to use their program, but if they don't, Mr. Famous requests Serenade to protect them.

They saved MegaMan from Bass and protected him and ProtoMan from Bass' Vanishing World. Unfortunately, the Vanishing World was too strong for Serenade to handle, but Serenade persisted since they promised Mr. Famous that they will protect them. They are able to reflect Bass' Vanishing World, but got caught by Bass as the result and is absorbed, deleting them. A remnant of Serenade's data tells MegaMan that even if they are able to fight with 100% of their power, the possibility to defeat Bass who has acquired the power of darkness is slim, but they believe that MegaMan and ProtoMan's unity can defeat Bass.

When CosmoMan, disguised as Bass, sneaked into Netopia base to lure MegaMan, Colonel reveals that Serenade is his best friend and bears grudge against Bass for deleting them. This also explained his reason for being unable to believe in MegaMan who has formed a rivalry bond with Bass until MegaMan proves himself by figuring out CosmoMan's disguise.

Serenade appears in front of Bass when the latter was captured by the last defense system of the Cyber Beast. They tell Bass to give all of his power to their only true friend, MegaMan. Hearing this, Bass insists that MegaMan is his nemesis and breaks free from the defense system while Serenade merely smiles at Bass' answer.

In the omake of the last volume of the series' reprint version, Serenade is revived and appears before Bass after he allows MegaMan to return to the original Cyber World, giving his praise for giving MegaMan a chance to return home while he stayed behind to defeat the bug. When Bass asked them why they watched, Serenade revealed that they had watched since Bass and MegaMan started their journey together, much to the former's embarrassment. Serenade admits that they feel lonely and offers to accompany him in MegaMan's place from now on, but Bass ignores them. Serenade follows Bass and even offers to fight him again once in a while, but the annoyed Bass tells Serenade not to follow him.

Being the only NetNavi (except for MegaMan) confirmed to have defeated Bass, Serenade is among the most powerful Navis in the Mega Man Battle Network series. They have some very unusual attacks.

Serenade is a Giga Chip exclusive to the White version of the game. It is a chip of darkness that requires a Dark Hole on the field to function. When used, Serenade appears and attacks with Holy Shock. 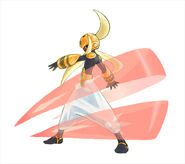 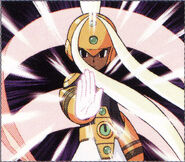 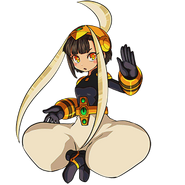 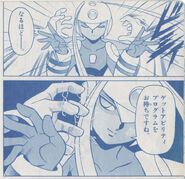 Serenade.EXE from the Battle Story Rockman.EXE manga.
Add a photo to this gallery

Retrieved from "https://megaman.fandom.com/wiki/Serenade.EXE?oldid=309414"
Community content is available under CC-BY-SA unless otherwise noted.