Serges, known as Sagesse (サーゲス, Sāgesu) in Japan, is the leader of the X-Hunters, a group in Mega Man X2 made to counter X and the Maverick Hunters. He and his fellow X-Hunters fight to avenge Sigma and attempt to resurrect Zero as a Maverick under their control.

Serges is a hunchbacked Reploid with primarily blue armor. He is elderly in appearance, possessing a large metal moustache, a beard, and five spikes of hair. One of his eyes is large and circular, like a monocle. Like the other X-Hunters, his feet are pointed at the tips. He normally wears a black cape with a purple lining and a black hat reminiscent of an ushanka, but discards them for battle.

A brilliant Reploid scientist with a genius compared to a legendary mad scientist,[1] Serges' vast intellect makes him an integral part of Sigma's Maverick army. It seems that he came up with the plan for the unification of Zero's parts to resurrect and use him for their own purposes, also upgrading Zero's body and creating the Z-Saber.[2] However, he lacks physical strength, so he rides machines such as a flying pedestal and a tank to attack. He appears to know more about X and Zero's pasts than he lets on.

Nothing is known of Serges' past. He is the head of the X-Hunters, who took over Sigma's rebellion in his absence to continue the war. The rebellion laid low at first, quietly analyzing X and the Maverick Hunters while researching and repairing the parts of Zero recovered from the last battle. However, without Zero's control chip they could not fully resurrect him.

Six months after Sigma's defeat, the Maverick Hunters raid an old factory in a desert that is mass-producing weapons and Mechaniloids for the Maverick army. The X-Hunters watch the attack from afar in their Arctic fortress, affirming that they will not underestimate X.

After X destroys two of the eight Mavericks, Serges and the X-Hunters grow anxious. They challenge X to a series of duels, using the rebuilt parts of Zero's body as bait. Serges is the second to stop awaiting X's arrival among the stages, but if X defeats him before he leaves, he will relinquish one third of Zero's body - his head - before retreating.

Serges later reappears as the boss of X-Hunter Stage 2 to challenge X again, this time piloting a large combat vehicle. X defeats him, and Serges cryptically mentions a prophecy before exploding.

Serges reappears as a data recreation within Sigma Stage 2, being the only X-Hunter to do so. He seems to have no will or thoughts of his own, being composed only of battle data. X defeats him and moves on.

When encountered in one of the hidden rooms, Serges rides a low-floating spiked platform. The platform possesses an energy barrier that renders him nearly invulnerable while active; it can only activate while he is standing still on it. The barrier is programmed to activate when the FIRE button is pressed. This is important because it will activate while the player charges up a shot, but not when the player releases that shot. The player can use this to their advantage by making sure the first charge shot hits, and saving the second one for when he's away from his pod.

It is worth noting that if X charges up Silk Shot, Serges will pause and laugh for as long as the player continues to hold down the FIRE button, and the shrapnel is attached to X's Buster, giving X an opportunity to fire away at him as his barrier will be down. His weakness in this encounter is the Sonic Slicer. If the player is clever, instead of striking Serges directly head-on with a Sonic Slicer, the player can fire it at a wall, allowing it to rebound and strike Serges from behind - his barrier does not seem to protect him from rear assaults, or when the FIRE button has not been pressed for a while after a weapon has been fired. Another advantage of the Sonic Slicer is that if the player has the X-Buster upgrade, one can charge the Sonic Slicer which will release several Sonic Slicers vertically in a wide spread that will come down and take out some of mines.

The third method is to use the Spin Wheel on the barrier when he is on the platform. The Spin Wheel can also be used to sweep the mines off the floor. When he jumps and scatter shots from his hat-like head part, land a well-timed X-Buster on him because while jumping Serges won't be covered by the barrier.

Serges is encountered again in the second X-Hunter Stage, piloting an enormous machine named the Serges Tank (サーゲスタンク, Serges Tank) that takes up a large portion of the right side of the screen, with four platforms moving up and down in the room. The floor is also lined with spikes, which can make this battle a bit tricky. He attacks by firing a variety of energy balls and laser beams from the four cannons mounted on the front of the vehicle, after two of the cannons are destroyed he will close in destroying two platforms in the process. After, the remaining cannons are destroyed, the front of the machine will be blown open and Serges will continue to attack by firing large energy bullets via the small cannon on his cockpit. The Giga Attack is very effective, as it is one of the quickest ways to tear the machine open to expose Serges. This also has the benefit of causing him to destroy only one platform instead of two, giving the player more room to maneuver during the second stage of the battle. Charged Silk Shots, Sonic Slicers, Speed Burners, and Magnet Mines are also good choices.

Serges serves as the boss of the second final stage in this game. As with the second encounter in Mega Man X2, he approaches from the right. The four barrels fire slow moving projectiles, with the exception of the bottom portion, which is a highly damaging laser. Destroy the outer set of guns with Electric Spark - if done quickly, he will not advance all the way.

Once the outer guns are destroyed, the player can attack with Speed Burner. If X runs out of energy, the player may want to switch to Storm Tornado, since that is the easiest method to land a hit (even though he only takes minimal damage). He is also slightly weak to Rolling Shield, however it is sometimes hard to hit him with it. The X-Buster will also suffice, as long as it's fully charged.

Serges appeared in the manga.

Serges later appeared alongside various other Mavericks in the Worlds Unite crossover between the Archie Comics Mega Man and Sonic the Hedgehog lines. 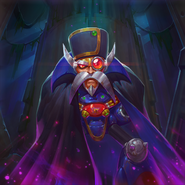 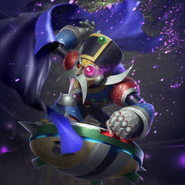