The Servbots, known as Kobun (コブン, Kobun) in Japan, are 41 small all-purpose support robots from the Mega Man Legends series created by Tron Bonne, each with its own distinct personality and talent. They serve as henchmen loyal to the Bonne family of air pirates and the crew on board the Gesellschaft.[1] They work several tasks like flying the Gesellschaft and piloting their machines on missions, cleaning and cooking, assisting Tron in building and fixing her machines, among others in their schedule.[2][3] Although Tron built forty Servbots, forty-one of them exist, with the origin of the forty-first Servbot being unknown to her. Their cute appearance is useful in avoiding suspicion, leading most to assume them to be harmless.

The Servbots have childlike personalities and love Tron as a mother, but often get in trouble for their mistakes, and she punishes them severely when they goof off. The Servbots are somewhat cowardly, timid and unreliable, but they are also steadfast and hard-working, always trying their best to aid the Bonne family. Though they obey Tron's orders without question, the Servbots are not malicious in nature, and are typically friendly towards others, even their enemies. No two Servbots are exactly alike in personality or ability, with some more skilled at tasks than others, and some having hobbies specific to them.

Due to their small size, the Servbots aren't very strong physically, but in the Nakkai Desert they are shown to be strong enough to lift a boulder of their size and hold it for a few seconds before letting it fall on them. They are considerably durable, being able to survive several dangers like flames, spikes, and large explosions, though they aren't indestructible. In Marvel vs. Capcom 2: New Age of Heroes, the playable Servbot will release smoke as he gets damaged, and when defeated he explodes and releases small Refractors similar to a Reaverbot. Should they be damaged, their maintenance and repairs are done by Tron. Although they are robots, the Servbots possess fully developed senses of taste and smell, and most of them are good at cooking. Their favorite food is extra spicy curry rice.

In the beginning of the game, Teisel Bonne and Bon Bonne go to the Nakkai Desert to search for the ruins rumored to have a valuable Refractor called "Diana's Tear", Teisel piloting the Gustaff with Servbot #1 as the Sniper and accompanied by Servbots #2 to #7. When Bon locates the ruins, Teisel and the Servbots go to his position and are attacked by Glyde, who defeats them with his mecha Rafale. Glyde captures Teisel and Bon, and the Servbots are left behind with the damaged Gustaff. Tron, worried with her siblings and the Servbots, go to their last known locations and finds the Servbots crying and scared, who explain to her what happened and that Teisel owns a debt to Lex Loath.

Back in the Gesellschaft, Tron orders the Servbots to search the Gesellschaft and they find Teisel's IOU receipt, which says he owes one million Zenny to Loath. After that the Servbots assist Tron in her missions, and they can make multiple tasks such as attack or hold enemies, verify and use objects, pass by narrow passages, and bring items and money to Tron. Tron can interact with all Servbots inside the Gesellschaft, and she works with them to build items in the Lab, sell items in the Storage, train them in the Gym, and use the Torture Room to punish lazy Servbots. Tron can choose up to three Servbots to scout Ryship Island between missions to obtain items. All Servbots can be taken to missions, with a limit from one to six (seven with Gustaff's Sniper) depending of the mission, but as the Servbots are busy building the Gesellschaft, not all of them can be chosen from the beginning, becoming available when the rooms they are working on are completed after some missions. In some missions, the Servbots pilot the Servbot Borer, the Servbot Truck, and a forklift.

All Servbots have the following stats, though their skill levels vary. The Sniper Servbot ratings affect Gustaff's weapon.

Some Servbots also have special skills that can be useful in combat or on the Gesellschaft:

After obtaining the "Red Head Parts" with Servbot #9, Tron can choose one Servbot to be her favorite, which will make the gray part in the top of his head red and give a bonus to his abilities. When Tron was making Servbot #1, she tried to use different colors and liked red, but she didn't have enough Zenny to use it for everyone. By talking with Servbot #17 after choosing a Servbot to be the favorite, Tron may rest in her room and leave the favorite Servbot in charge until she awakens, and the favorite can visit a casino to obtain money for Tron.

The favorite Servbot pilots the Gustaff in the end of the game to rescue the Bonnes and in the final battle against Lex Loath aboard the Colossus, a giant Reaverbot. If no Servbot is chosen before the final stage, Servbot #1 will automatically become the favorite. Servbots #22, #23 and #27 can have all their abilities increased to the limit if one of them is chosen to be the favorite.

In Marvel vs. Capcom 2, the favorite Servbot appears in one of the playable Servbot's introductions.

The Servbots attack Kattelox Island with the Bonne family and are enemies that fight against MegaMan Volnutt. They pilot several fighting machines such as the Blumebears, Draches, Leopolds and Hornisses. Except for a few of them, the pilot Servbot will appear when the machine is destroyed, and he will run away from the area. If Mega Man attacks the escaping Servbot, he will be burned out when defeated, and hitting him again continuously will make him drop an energy cube, dropping up to three of them before stopping.

The Servbots also appear in several locations of the city, where they do several things like visit Apple Market and the library. In a side-quest, the police believes that Servbots stole money from the bank and pursues them in Downtown, and Mega Man helps to stop them. The Servbots manage to escape, but they drop the trunk with 200000 Zenny and Mega Man finds it, having the choice to give it to the police or keep it for himself. If the money is returned, the Servbots will open a hamburger shop in Downtown called Stripe Burger. It is later explained that it was a misunderstanding and the Servbots had actually borrowed the money.

Like the first game, the Servbots appear as enemies working for the Bonne family and they pilot several fighting machines in Saul Kada Island, some Servbots also fighting without machines by throwing bombs. Three Servbots assist Teisel when he fights against Mega Man with the Blitzkrieg, and Servbots #11 and #23 are with Tron in the Saul Kada Ruins. In the battle against the train Gemeinschaft, Servbots ride missiles on Mega Man's direction, and they can be picked and throw back at the Gemeinschaft. After approaching the train, Servbots will appear and throw bombs at Mega Man.

The Servbots also appear walking around Manda Island and the Sulphur-Bottom. In Manda Island, four Servbots are in the Pokte Plains before the battle against Tron's Jagd Krabbe. After her defeat, three Servbots will leave and one will stay behind and wonder where the others went, getting worried and scared after some time. He disappears after the second Key to the Mother Lode is given to Verner Von Bluecher, suggesting he returned to the others. In the Sulphur-Bottom there are three Servbots present. When the Third Key to the Mother Lode is obtained, the Servbots are found by the guards and they are given food and a work in the airship's Junk Shop.

Mega Man also receives two letters from Servbots #20 and #32. #20 asks Mega Man if he wants to become Servbot #42 to cheer up Tron, which has been depressed after her defeat in Manda Island. #32 asks what happened with Tron in the Saul Kada Ruins as every time they mention that mission her face goes red and she gets upset and depressed.

The Servbots are last seen helping Tron and Roll Caskett build a rocket to rescue Mega Man from Elysium.

Servbots would appear in the cancelled game Mega Man Legends 3, where they assist Tron to build a rocket to rescue Mega Man. In the Prototype Version, Barrett has to retrieve several Servbots around Teomo City within a time limit in the mission "Yes, Miss Tron". Servbots also appear with Donner Wels in the mission "Bonne Family Showdown".

Servbots follow Tron and appear in her attacks, and one Servbot is a hidden playable character in Marvel vs. Capcom 2: New Age of Heroes. The Servbot is one of the weakest characters in the game, having low attack and defense, but in compensation his small size makes it difficult to hit him, making him able to avoid many attacks, notably most of Abyss' second form attacks. He mainly attacks using utensils, food and the assistance of other Servbots. His most powerful attacks are Lunch Rush and King Servbot.

In Marvel vs. Capcom 3: Fate of Two Worlds and Ultimate Marvel vs. Capcom 3, several Servbots appear as background characters from the Kattelox Island and Bonne Wonderland stages, and a large Servbot balloon appears in the Daily Bugle stage. Like Marvel vs. Capcom 2, one Servbot accompanies Tron in combats, and they are present in some of her special attacks. If Tron isn't fighting in the Kattelox Island stage, she appears in the background with a Servbot. The Servbot Mask also appears in two of Frank West's Hyper Combos in Ultimate Marvel vs. Capcom 3: "Blue Light Special" and "Funny Face Crusher". In Tron Bonne's ending, Tron reprograms a Sentinel to become Servbot #42. She then tries to convince MegaMan Volnutt to go out with her threatening to order #42 to attack should Volnutt say no. If Tron is defeated by Zero, he says that it'll take more than "an army of Reploid-wannabe servants" to best him. If she loses to Sentinel, he says that he halted the "fraudulent Sentinel" production.

During the events of the game Tron is accompanied by Servbots #1, #17 and #28. The other Servbots work aboard the Gesellschaft with the same position from The Misadventures of Tron Bonne, having minor appearances.

A Servbot appeared as a playable character and in the background of the Ring of Destiny stage.

Servbots appear in a group as a boss in Mega Man X DiVE. They also appear when Tron Bonne uses some of her skills. One Servbot was made playable beginning on April 1, 2021.

List of Servbots from The Misadventures of Tron Bonne. 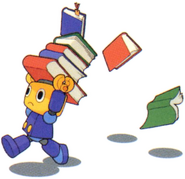 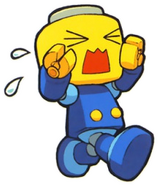 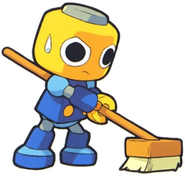 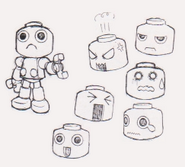 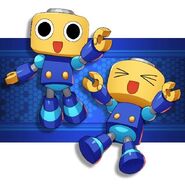 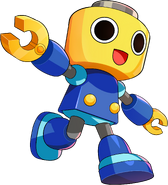 Servbot in Marvel vs. Capcom 2: New Age of Heroes. 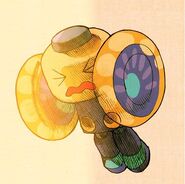 Servbot in the versus screen from Marvel vs. Capcom 2.

A Servbot in Tron's ending in Marvel vs. Capcom 3.

Tron and a Servbot in Super Gem Fighter: Mini Mix. 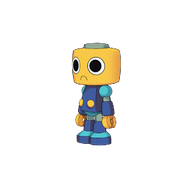 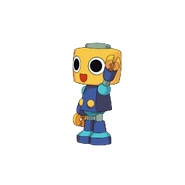 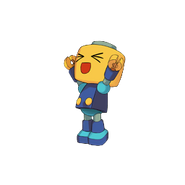 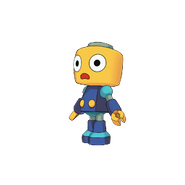 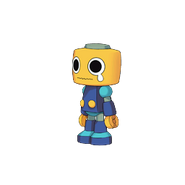 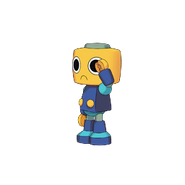 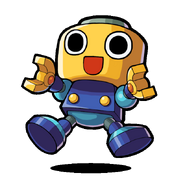 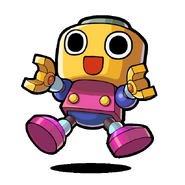 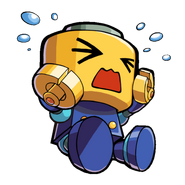 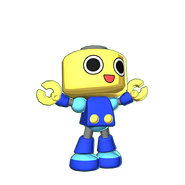 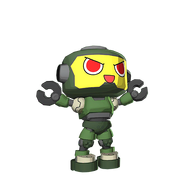 Servbot #41 in the manga (secret weapon built by the Servbots). 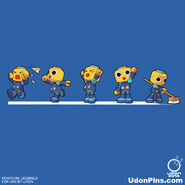