"X, surely you can tell. I'm stronger now. All due to the power of Supra-Force Metal! I swore allegiance to Epsilon for this!"
―Shadow, Mega Man X: Command Mission

Shadow (シャドウ, Shadou) is the tertiary antagonist of Mega Man X: Command Mission. Initially an ally Maverick Hunter, he betrays X and Zero, leading them into an ambush and joining the Rebellion Army.[1]

Shadow is a tall Reploid with black and yellow armor. His armor is designed to resemble that of a samurai's, especially his shoulderpads and helmet. He possesses a large beam sword in the place of his left hand, and his back-mounted Savage Tusk of Thunder resembles a sword in a sheath. After his betrayal, he constantly wears a devilish sneer.

Shadow is described as a hot-shot of a Maverick Hunter. Although he appears at first to be a reasonable individual, his true persona is extremely ambitious, and he will backstab anybody he needs to for his own personal gain. Even as Shadow was losing to X and Zero, he showed no remorse for his betrayal, although he was hoping that X and Zero would have joined him in the Rebellion. He is also shown to be somewhat sadistic and violent, frequently making references to cutting people up to pieces, as well as constantly wearing an insane grin. He also seems to have high respect for Epsilon, however, as he reacted angrily to X's accusations of Epsilon being a Maverick, and was fervently trying to defend the Supra-Force Metal from the Maverick Hunters.

Shadow is deployed to Giga City's Lagrano Ruins alongside X and Zero. He claims to know the layout of the island perfectly. After X is separated from the group by a mysterious attack, Shadow and Zero continue on their own. They rendezvous at the top of the ruins, where Shadow betrays them and reveals he has joined Epsilon. The Rebellion cadres appear and try to convince X and Zero to join, but they escape and are separated.

Shadow is next seen when he confronts X and company in the Gimialla Mines. He reveals the existence of a powerful new resource, the Supra-Force Metal, as well as the fact that its power is why he betrayed his comrades for the Rebellion. Despite using the Supra-Force Metal to fight, he is still defeated when Zero arrives and joins the fight for revenge. However, before his destruction, he makes one last attempt at Zero with his Savage Tusk of Thunder, only to be intercepted and countered by Spider, who took the blow for Zero and then finished Shadow off.

X: Shadow! You're gonna pay for betraying us...

Shadow: You know very well. It's an improved form of Force Metal that the Rebellion Army is studying to help all Reploids achieve their ideal! You government lackeys can't have it!

Spider: Achieve their ideal? What is it that the Supra-Force Metal does exactly?

Shadow: There's no need for me to describe the effects. Take me on and see for yourselves!

Shadow: X, surely you can tell. I'm stronger now. All due to the power of Supra-Force Metal. I swore allegiance to Epsilon for this!

X: You sold out your friends for that power? That's some "ideal!" All you Mavericks care about is power!

Shadow: How dare you call the great Epsilon a Maverick! X, I had hoped to gain you as an ally, but I hope no longer! I'll take your head, for Epsilon! It all ends here!

(Shadow advances, but is intercepted and knocked back by Zero.)

Shadow: You! You're alive?!

Zero: Think you could beat me so easily? Shadow! I've got a big load of payback just for you! Time for round 2! Let's do it, Maverick! 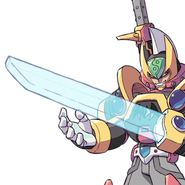 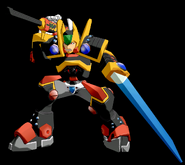