Shadow Blade (シャドーブレード, Shadō Burēdo) is Shadow Man's Special Weapon in the original Mega Man series. It is a large hira shuriken that can be thrown to attack. When used by Shadow Man, the shuriken is coated with a special, deadly liquid that is capable of deranging the functions of mechanisms. He usually throws two Shadow Blades at a time: one diagonally up and the other in front of him.

When used by Mega Man, the Shadow Blade is smaller in size, can only throw one at a time, and has a relatively short range. However, the blade boomerangs back to where it was thrown from, and he can throw it in five different directions (left, right, diagonally up and right, diagonally up and left and straight up). In Mega Man 2: The Power Fighters, the directions are reduced to four, being unable to be shot straight up.

Mega Man obtains Shadow Blade after Shadow Man's defeat in Mega Man 3. It is the weakness of Spark Man and Kamegoro Maker, and is also effective against Magnet Man, Doc Robot (Bubble Man and Heat Man), and Shadow Man in the rematch against him in the Wily Castle. Hard Man, Doc Robot (Air Man), and Gamma (2nd form) are immune to it.

Two Shadow Blade uses one weapon energy unit. With a full energy gauge, it can be used 56 times. In the NES version of Mega Man 3, the player can use Shadow Blade endlessly by changing the weapon after each shot, avoiding an energy unit being used by the second Shadow Blade. This issue was fixed in later releases like Mega Man: The Wily Wars.

Shadow Blade, alongside all weapons from the first three games, can be used in the Wily Tower mode. It is more effective against Hyper Storm H. Iron Ball and the "Wily Machine" (2nd and 3rd forms) are immune to it.

Like Mega Man 3, the Shadow Blade is obtained after Shadow Man's defeat in Mega Man III. The Shadow Blade is Spark Man's weakness. Punk and the Wily Machine are immune to it. Two Shadow Blades uses one weapon energy unit. With a full energy gauge, it can be used 38 times.

The Shadow Blade is obtained by the player that takes the Special Weapon Item dropped by Shadow Man after his defeat in the "Search for Wily!" course. It is the weakness from Bubble Man and Dr. Wily. One Shadow Blade uses one unit of weapon energy. With a full energy gauge, it can be used 16 times.

The Shadow Blade is obtained after Shadow Man's defeat in the end of the first episode, Temple of the Moon. It can only be used by loading a save of the cleared episode on the next episode.

The Shadow Blade appears in the fighting game Super Smash Bros. for Nintendo 3DS / Wii U as a custom move for Mega Man's neutral special, Metal Blade. It must be unlocked before it can be swapped out.

Mega Man throws a Shadow Blade, which can be thrown in eight directions like the Metal Blade- unlike Mega Man 3, where he can only throw them in five directions. It deals 2% damage per hit by default, can hit multiple times unlike the Metal Blade, and is less susceptible to being used against Mega Man, since cannot stick to the ground or be picked up. Its range is considerably shorter than the Metal Blade as in the main series, but it boomerangs back to the point where it was thrown, making it effective for opponents that are in its way when it returns, as well as for pulling them towards Mega Man for close-range attacks.

In the Mega Man comic book series by Archie Comics, the Shadow Blade was frequently used by Shadow Man, especially during his fight against Mega Man. After Mega Man managed to copy his Shadow Blade ability, he used it to take down both Magnet Man and Spark Man. When infiltrating Wily's third castle via the sewers, Mega Man briefly adopted the use of Shadow Blade to take down a Kamegoro Master, while monologuing about his determination that there will not be any more betrayals, or any more fighting against other robots. 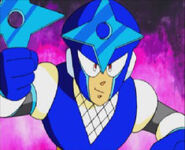 Shadow Blade in the Short Circuits from Mega Man #42.