Shadow Runner (シャドウランナー, Shadou Rannā) is a Special Weapon in Mega Man X8 obtained by X and Alia after defeating Dark Mantis. When equipped, X/Alia shoots a shadowy boomerang that leaves a dark blue trail that hunts down and spirals around enemies. If there are no enemies present, the weapon merely spirals around the character and returns inside the player character's body in a puff of black smoke, at which point X has his weapon energy restored. When charged, X shoots out five black boomerangs at once. However, in their charged state, the Shadow Runners cannot restore X's weapon energy.

For his version of the attack, Dark Mantis shoots a black line towards X's position. The line then curves back to Dark Mantis' location if it misses.

This weapon is Gravity Antonion's weakness and is also very useful against Copy Sigma and Lumine's second form. 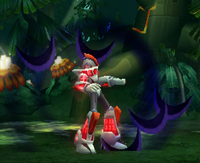 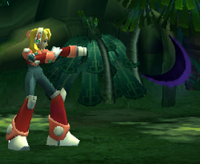 Counterparts to this Weapon